Ever wonder what first impressions Kaiser Wilhelm II might have tweeted upon his arrival in Jerusalem on a dusty afternoon in 1898? Or the Instagram images Christian pilgrims to Capernaum would have uploaded? What sort of Facebook posts do you think the earliest Zionist settlers would have written, or their Arab and Bedouin neighbors? How about the WhatsApp messages that British soldiers stationed in Palestine during World War I would have sent home to their parents?

Of course, the events mentioned above took place years before the development of the internet, and even longer before the emergence of social media platforms. But that isn’t to say that there were no quick, easy, cheap forms of international communication. Long before anyone considered the possibilities of instantaneous communication, postcards served as the primary way to keep in touch, send pictures, collect souvenirs, and to share experiences with family and friends in far-away places.

Today, postcards have largely gone the way of the telegram and horse-and-buggy. However, for London-based historian and collector David Pearlman, 19th and 20th-century postcards from the Holy Land serve as an invaluable window into the modern history of the Land of Israel, covering virtually every area of life: religious, architectural, fashion, social mores, historical events, art, politics, and travel. Pearlman has generously donated his collection through the British Friends of Hebrew University to the Folklore Research Center at the Hebrew University of Jerusalem (HU)’s Mandel Institute of Jewish Studies.

For over sixty years, Pearlman—an accountant by day and a collector by night—scoured auction houses, private collections, and estate sales to piece together his “Postcards of Palestine” collection. It is the largest of its kind in the world, numbering 130,000 postcards. The collection documents Israel’s history, from the Ottoman Period and British Mandate to the early Pioneers, from the Six-Day War through the early 21st Century. It documents historic events from General Allenby’s visit to Jerusalem in 1917 and Lord Balfour’s attendance at the grand opening of Hebrew University in 1925 to the creation of the State of Israel and the emergence of new cities like Tel Aviv, among others.

“I began collecting stamps as a young boy and graduated to postcards when I realized that instead of collecting dull postage stamps I could collect these beautiful cards,” Pearlman recalled. “I kept them in shoeboxes in my garage all these years. At a certain point, the collection grew so large that I began to park my car on the street to make room for more shoeboxes.” 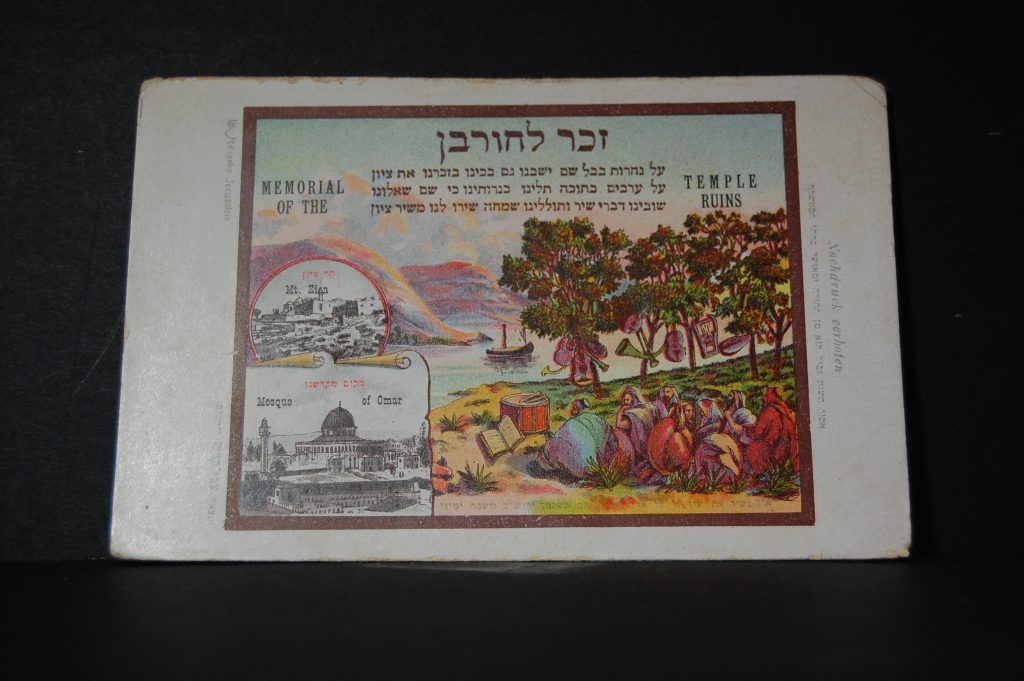 Another interesting facet of the collection is the abundance of artwork by leading 20th Century Bezalel artists, such as Meir Ben Gur Aryeh, Ephraim Lilllien, and Zeev Raban, as well as photography by “Karimeh Abbud – Lady Photographer,” one of the first female photographers in the Arab world.  A sizeable portion of the collection are postcards that catered to Christian pilgrims who made their way from Egypt to Jerusalem to Damascus, visiting the holy sites along the way and sending their loved ones postcards that depicted camels, palm trees, Bedouins, Hassids, an overflowing Dead Sea, and included pressed flowers or scriptural quotes. “A classic message would read, ‘Yesterday we were in Bethlehem. Today we’re in Jerusalem. Tomorrow we’re going to Nazareth.  It’s so hot here!’” shared Dr. Dani Schrire, director of HU’s Folklore Research Center, who together with Professor Hagar Salamon, head of Folklore and Folk-Culture Studies, was entrusted with this treasure.

“The most moving part of this story is David Pearlman’s passion for the collection. You can see it has truly been a labor of love and we are grateful that he’s entrusted his life’s work to our university.  It is a terrific vote of confidence in our position as a world-class research institution,” shared Mr. Nigel Salomon, Chief Executive of the British Friends of Hebrew University.  “It’s also fascinating to read the postcards that British Tommies stationed in Palestine sent home during World War I.”

In one such postcard, a soldier named Walter writes to his parents, “I can say ‘mafish’ which means ‘enough’[in Arabic’]…and I hope the war will soon [end] so I can go home again.” Another soldier wrote, “I came through here…between Mt Ebal and Mt Grizim…It is of course the Shechem where Jacob fed his flocks and Jacob’s well is here. There are many springs and consequently gardens where I saw the first green I’d seen for months.” Another British soldier marveled at the biblical resonance of the cities around him. He mailed his parents a postcard of the Sea of Galilee and wrote this message on the back, “This is the shot I should like to see more than anyone in Palestine but don’t expect to have the opportunity to do so. The man in the next bed was up there with the cavalry says it’s very fine, the water being beautifully clean and there are several nice streams running into it. While there they were able to get fresh fish which was a nice change from the ‘bully [beef]’…The lake which saw so much of His life on earth and which to my mind holds such fascination.”

According to Schrire, the collection’s significance is not merely one of quantity. David Pearlman did extensive research on his postcards and provided HU researchers with valuable annotations and a complete catalog of his collection which includes 1,500 postcard publishers.  And Pearlman’s gift is now in good hands: “In a way, Pearlman wanted these cards to return to Zion, to the Hebrew University of Jerusalem.  Once a collection arrives, we bring in conservation specialists to preserve the collection to the highest standards. And then the real fun begins-HU researchers, from a variety of disciplines, are excited to begin working on the collection and to understand the imagination that the Land of Israel had on its many visitors.”

Commenting on this unique gift to the Hebrew University, HU President Asher Cohen added, “this extraordinary collection of postcards has found its way home to Jerusalem; it’s entirely appropriate that Israel’s leading center of advanced learning and research is now the home and custodian of such a remarkable trove which joins our other notable collections—Albert Einstein’s personal and academic papers and the Steven Spielberg Jewish Film Archive.”

When asked about his favorite postcard, Pearlman shared, “I haven’t got a favorite postcard but it’s the whole collection that feels like part of my family. They’re all my favorites. It’s like touching a piece of history,” he concluded. 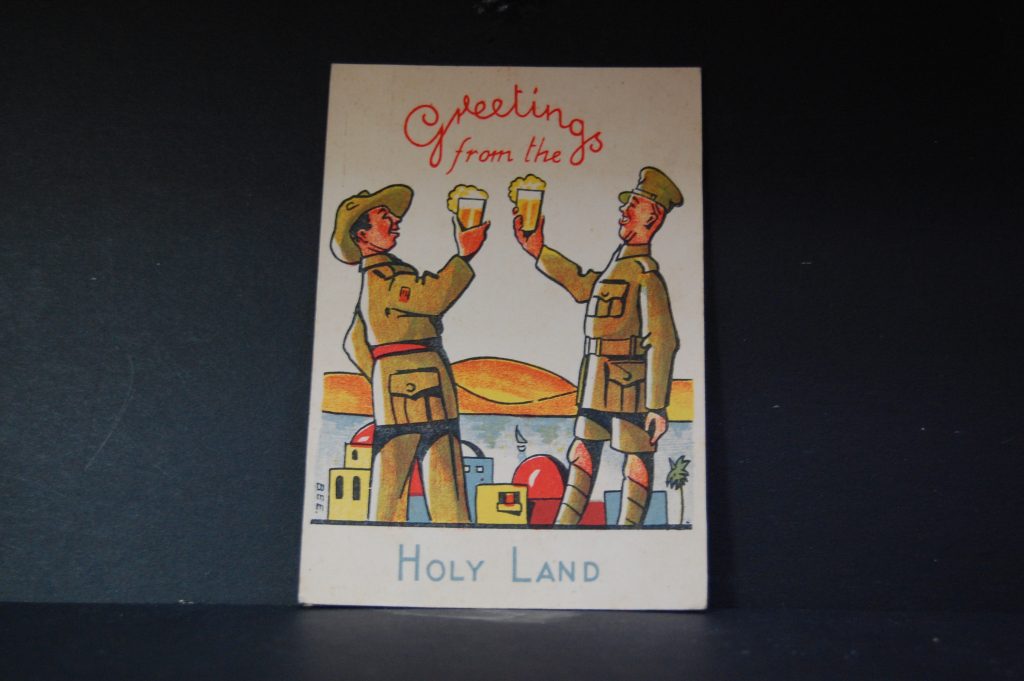 Click here to view more photos of the collection.

About the Folklore Research Center at Hebrew University

The Folklore Research Center at Hebrew University was established in 1970 by the late Professor Dov Noy and is home to several important collections, including The Joseph and Margit Hoffman Judaica Postcard Collection, The Ralph Perry Palestine Postcard Collection, The Israeli Proverb Research Project, The Documentation Project of Jewish Papercuts, the Wandering Jew Archive of Yom Tov Lewinsky, and the Ya’akov Zidkoni Collection of Jewish Humor in Mandatory Palestine and Israel, among others.

Storage jars form one of the main ceramic types which were produced and abundantly used ever since pottery was invented....
READ MORE
Science/Technology
NEWS

It is a fact that has long baffled doctors: Cancer in the small intestine is quite rare, whereas colorectal cancer,...
READ MORE