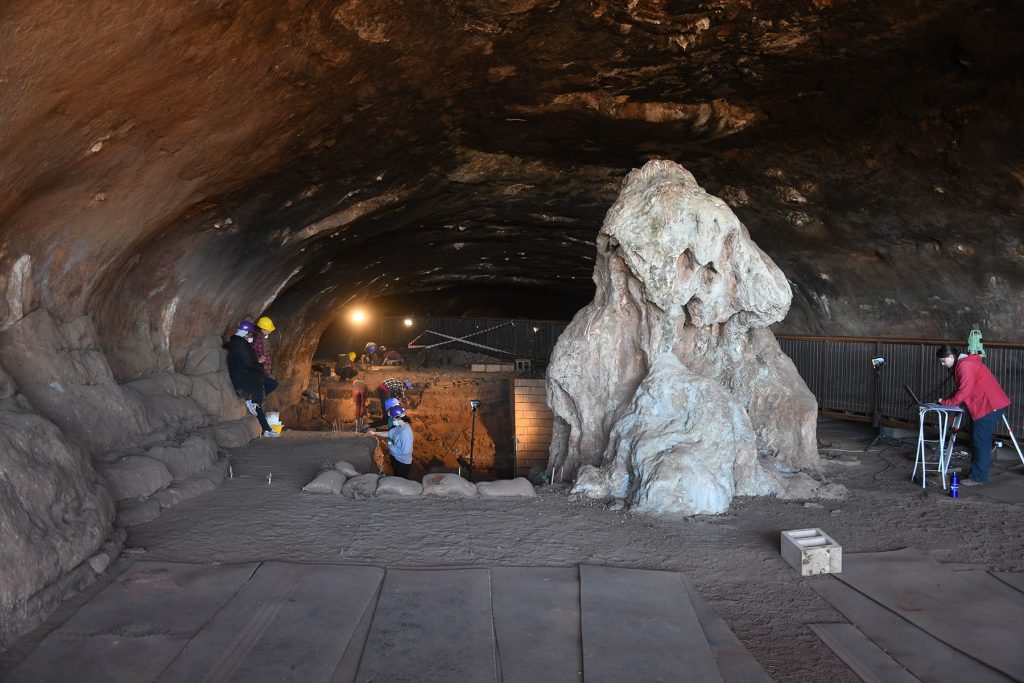 Few sites in the world preserve a continuous archaeological record spanning millions of years. Wonderwerk Cave, located in South Africa’s Kalahari Desert, is one of those rare sites. Meaning “miracle” in Afrikaans, Wonderwerk Cave has been identified as potentially the earliest cave occupation in the world and the site of some of the earliest indications of fire use and tool making among prehistoric humans.

New research, published in Quaternary Science Reviews, led by a team of geologists and archaeologists from the Hebrew University of Jerusalem (HU) and the University of Toronto, confirms the record-breaking date of this spectacular site. “We can now say with confidence that our human ancestors were making simple Oldowan stone tools inside the Wonderwerk Cave 1.8 million years ago. Wonderwerk is unique among ancient Oldowan sites, a tool-type first found 2.6 million years ago in East Africa, precisely because it is a cave and not an open-air occurrence,” explained lead author Professor Ron Shaar at HU’s Institute of Earth Sciences.

The team was able to successfully establish the shift from Oldowan tools (mainly sharp flakes and chopping tools) to early handaxes over 1 million years ago and to date the deliberate use of fire by our prehistoric ancestors to 1 million years ago, in a layer deep inside the cave. The latter is particularly significant because other examples of early fire use come from open-air sites where the possible role of wildfires cannot be excluded. Moreover, Wonderwerk contained a full array of fire remnants: burnt bone, sediment, and tools as well as the presence of ash.

Dating cave deposits is one of the greatest challenges in paleo-anthropology, aka the study of human evolution. To overcome this challenge, the team analyzed a 2.5-meter thick sedimentary layer that contained stone tools, animal remains, and fire remnants using two methods: paleomagnetism and burial dating. “We carefully removed hundreds of tiny sediment samples from the cave walls and measured their magnetic signal,” described Shaar.

Magnetization occurred when clay particles, that entered the cave from outside, settled on the prehistoric cave floor, thereby preserving the direction of the earth’s magnetic field at that time. “Our lab analysis showed that some of the samples were magnetized to the south instead of the north, which is the direction of today’s magnetic field. Since the exact timing of these magnetic “reversals” is globally recognized, it gave us clues to the antiquity of the entire sequence of layers in the cave,” added Shaar.

Prof. Ari Matmon, Director of HU’s the Institute of Earth Sciences, relied on a secondary dating method to further confirm when the earliest “humans” may have occupied the site. “Quartz particles in the sand have a built-in geological clock that starts ticking when they enter a cave. In our lab, we are able to measure the concentrations of specific isotopes in those particles and deduce how much time had passed since those grains of sand entered the cave,” he explained.

The dating of prehistoric human activity at Wonderwerk Cave has far-reaching implications. The co-directors of the Wonderwerk Cave project, Prof. Michael Chazan at the University of Toronto and Liora Kolska Horwitz at HU’s National Natural History Collections, explained that the findings at Wonderwerk “are an important step towards understanding the tempo of human evolution across the African continent. With a timescale firmly established for Wonderwerk Cave, we can continue studying the connection between human evolution and climate change, and the evolution of our early human ancestors’ way of life.”

On the southern edge of the Kalahari Desert, Wonderwerk Cave is also a place of great spiritual significance to local communities, attesting to the cave’s cultural importance for both past and present peoples. The Wonderwerk Cave Research Project is committed to protecting the site and to working with neighboring towns to develop the educational and cultural potential of this unique place.