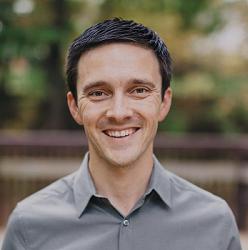 Nic Lesmeister said studying abroad in Israel ‘was a once-in-a-lifetime gift.’ In the spring of 2014, he moved into a new house with his family not knowing that later that year they would move to Jerusalem.

Nic explained that after his family settled into their home, he told his mentor about his desire to pursue a master’s degree in nonprofit management. To his surprise, his mentor suggested the Hebrew University of Jerusalem (HU). He recalled, “I thought he was joking at first, but he said it was one of the top universities in the world. So, my wife and I gave it serious thought, prayed about it, and decided to move to Israel.”

Nic participated in HU’s Nonprofit Management and Leadership program at the Rothberg International School from 2014-2015. He was interested in Israel’s nonprofit sector and believed that studying at HU would broaden his horizons.

The Hebrew University exceeded his expectations. “I learned so much from my peers and my professors were some of the best teachers I could have ever hoped for. I felt the knowledge we gained was academically challenging and practical.” Nic said.

When his family returned to Texas, they brought back an unexpected, but beautiful souvenir—a baby boy. Nic never imagined that one of his children would be born in Jerusalem. Happy memories like these and many others are why his family feels deeply connected to Israel and to the people they met there.

What began as a spontaneous decision to study abroad turned into a life-changing opportunity. Nic said, “I often glance at my HU diploma hanging in my office, smile, and thank God for the incredible opportunity to study at Hebrew University and live in Jerusalem while doing so. I feel that it was a privilege that many of my friends could only dream of experiencing, and I am so very grateful.”

Nic is currently the Director of the new Gateway Center for Israel, an initiative that educates the global Evangelical church about Israel and Jewish communities. He is also Pastor of Church & Jewish Relations at Gateway Church, a Texas megachurch with dynamic global influence. Prior to working in the nonprofit world, he was a young entrepreneur and aspiring philanthropist who bought, developed, and sold numerous small businesses in the finance and investment sectors.