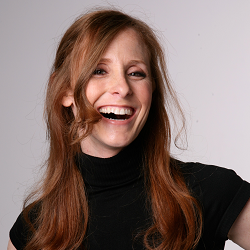 Amy Applebaum’s journey to Israel was nothing short of serendipitous.

“I was devastated and really didn’t know what to do,” Amy said. “Then I spoke with one of my professors at Chico, Dr. Sam Edelman, and he pointed me towards Jerusalem.”

Dr. Edelman helped arrange for Amy to receive a scholarship and a stipend to attend the Hebrew University, and that was all she needed. Amy packed her bags and made the spontaneous decision to study in Israel.

“That decision boosted my self-confidence,” Amy said. “I was in an entirely different country, exploring unique cultures, and not only was I surviving, I was seizing each opportunity life presented!”

The Hebrew University – where Amy studied communications – cultivated her intellect; expanded her sense of the world (she not only befriended people from all over the world, but traveled to Turkey, Cyprus, and Africa); and laid the foundation for her expertise in intercultural and interpersonal relationships.

Today, Amy is as an entrepreneur, business coach, author, media personality, wife, and mom of a precocious 5-year-old. Over the past decade, she’s helped tens of thousands of women achieve their personal and professional goals, and she’s been featured on ABC, CNN, TLC, Dr. Drew’s LifeChangers, and Martha Stewart Radio, as well as in the pages of Teen, Shape, Cosmopolitan, Woman’s World, and The New York Times. Plus, Amy became a certified hypnotherapist because she believes that success is just as much about “how you think” as it is “what you do.”

“The Hebrew University changed my life,” Amy said. “It was the impetus for everything I’ve ever done. It really shaped my future.”