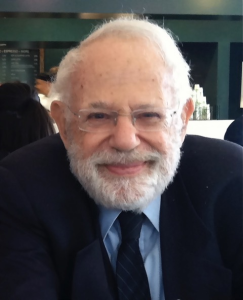 I was born in 1926. Ten years later, in 1936, my mother left Poland and brought me to Tel Aviv. My father remained in Poland to support us and had his visa to immigrate to Palestine for September 3, 1939. The Nazis invaded Poland two days before he was to join us. He escaped but the USSR exiled him to Siberia. We did not know whether he was alive. Almost six years later, my mother found him after advertising in Polish Army newspapers for his whereabouts. She kept him alive by sending him food parcels and ultimately getting him to leave USSR and having his visa to Palestine re-instated.

In 1946 my father published his major book about his experience in the Soviet Gulag. The book was published in Russian by the Ford Foundation and has been re-published repeatedly in Russian, Polish, German, Hebrew, and next year, more than forty years after my father’s death, an English translation will be published for the first time. The book was written almost twenty years before Aleksandr Solzhenitsyn, who helped raise global awareness about the gulags.

In Tel Aviv, my mother hardly made a living. I still don’t know how she managed to put me through a private high school. She did physical work seven days a week. Our apartment was open to any new “olim,” refugees arriving in Tel Aviv. We had dozens of people staying in our small apartment, or just show up for a dinner. We never knew who will come. It was just “the thing to do.”

One of the people who stayed in our apartment after arriving in Tel Aviv came in his Polish army uniform. His name was Menachem Begin. He became head of the Irgun, a major underground organization fighting for the establishment of a Jewish State. He would become prime minister of Israel a quarter of century later and win a Nobel Peace Prize for establishing a lasting peace with Egypt.

I too joined the Irgun. While serving I became its clandestine radio announcer, a three-inch mortar gunner, and a commander of the base for illegally infiltrated children arriving in Palestine.

We had no money, but I was accepted at the Hebrew University. There was no law school in Palestine at the time, so I studied Philosophy, Jewish History, and Literature. Professor Chaim Shearman turned me on to Medieval Poetry. Professor Joseph Klausner gave me for an award in my first year. I had my first taste of Talmud and listened to the stellar giants teaching at the time – including Martin Buber.

In 1948 I became Menachem Begin’s private secretary. Neither one of us knew what the role entailed. But, gradually, visitors from all over the world were seeking Begin’s attention and I was chosen to brief them and make their stay in Tel Aviv successful. One of the visitors was Professor Fowler Harper from Yale Law School. We bonded. He invited me to call on him if I ever visited the United States.

I spent three years at HU. In 1949 I passed my first final exam in Philosophy. Then, the money ran out. Begin moved into his public life, and I was out of a job. My New York family invited me to visit them. My first view of America was unforgettable: I was detained for three months at Ellis Island as a test case for “Irgun” visitors! But on the day when I was paroled into the U.S., I was also given a hero’s reception by William O’Dwyer, the Mayor of New York.

In February 1950 I visited Professor Harper at Yale, and somehow, I was invited to apply. With $100 in my pocket, I went to New Haven, CT, where the Jewish community found me a room in exchange for providing elderly care. After my first exam, the school gave me a scholarship – I graduated in 1952. My Yale experience changed my life.

The University of Pennsylvania awarded me a Bicentennial Fellowship. After, I went through psychoanalysis. In 1955 I left Philadelphia but I took with me the best it had to offer – Gilda, who became my life-long wife. Soon after, Justice Mishael Cheshin of the Israel Supreme Court interviewed me and offered to take me on as his “clerk” if I showed up in his office on January 2, 1956. So, we returned to Israel, I clerked in the Supreme Court of Israel and in the Jerusalem District Courts. I then became a member of Israel Bar, did my basic training in the IDF and took a teeny, silent part in one of the most significant arguments in the Supreme Court – the Kastner case.

I started my life in America in San Francisco, where I taught law school, directed the local branch of American Jewish Congress, and became a lawyer in 1962. I had no clients. But while chairing the legal committee of ACLU, I took on 10 of their cases, pro bono, and won them all. I went into private practice in criminal defense and constitutional cases. For the rest of my career, I did one-third of my cases pro bono. I handled several of the race, gender, and free speech cases during the Civil Rights era. I handled and won the first televised argument in California Supreme Court (whether hypnosis of witnesses made their testimony admissible in court) and handled the appeal of John Gotti in New York.

But the most important part of my practice was organizational: I chaired the National Association of Criminal Lawyers, the California Academy of Appellate Lawyers and many other organizations dedicated to the improvement of criminal defense. I also taught classes as an adjunct professor at UC Berkeley, Hastings College, chaired the San Francisco Jewish Community Relations Council, lectured 49 consecutive years at my temple on its Yom Kippur services, and was listed for some 35 years in “Best Lawyers in America.”

Last year I published my third book – Philosophy of Early Zionism, which is now available on Amazon, and retired, grateful to my Yale Law School memory and am writing another book.