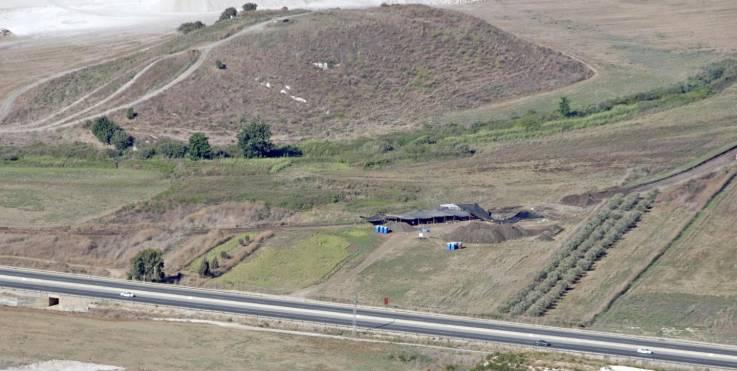 A Neanderthal settlement that was occupied by our ancient relatives on multiple occasions over the course of 10,000 years has been discovered by archaeologists in northern Israel.

The ‘Ein Qashish site was first identified in 2005 when flint artifacts and bones that appeared to date to the Stone Age were found. In 2013, after the site was damaged during the construction of a road, researchers were able to excavate almost half of the huge site. At this time, they came across the skeletal remains of three individuals, two of which could be identified as being Neanderthals.

The discovery allowed archaeologists to start building a picture of the occupants of the settlement—including when they were living there and what they were using the site for. The findings have now been published in the journal PLOS One.

The researchers, led by Ravid Ekshtain from the Hebrew University of Jerusalem, analyzed a 4.5 meter thick layer that they were able to date to between 71,000 and 54,000 years ago. Along with the Neanderthal remains, they found over 12,000 artifacts dating from across this period, suggesting the site was repeatedly occupied. They said Neanderthals probably lived at the site between 70,000 and 60,000 years ago.

Analysis of the artifacts and bones found indicate the occupants were making tools at the site and killing and consuming animals, including aurochs, deer and gazelle.

Annemieke Milks, an archaeologist from the U.K.’s UCL, who was not involved in the study, told Newsweek the findings provide an “exciting glimpse” into the potential settlement systems of Neanderthals. “We know that certain sites, such as La Cotte de St Brelade in Jersey were ‘persistent places’ used over long periods by Neanderthals, but these tend to be cave or rockshelter sites, providing natural locations for residential use,” she said.

“The evidence from ‘Ein Qashish shows repeated use over a very long period of at least 10,000 years of an open-air location, and increasingly looks to have been used for a variety of activities, including ones we would typically associate with living spaces. As a rare open-air site, ‘Ein Qashish helps us understand Neanderthal landscape use and behaviors.”

“We discovered that the site included evidence for meat consumption, transport of chert from short and longer distances into the site in order to knap and evidence for the knapping procedures at the site,” Ekshtain told Newsweek.

“One of the finds was a large partial skeleton of a wild cattle, including horn cores, located in an area surrounded by many flint artifacts. This find represents the location of the animal death because is unlikely that such a large animal was transported from a butchery location to an area of consumption activities.”

Normally, Neanderthal settlements are found in caves—these habitats provided shelter from the elements and a relatively constant temperature, being cool in the summer and warm in the winter. ‘Ein Qashish is unusual in that it is open air.

Ekshtain said the site would have been attractive to Neanderthals as it was close to a water source and different ecological niches—including mountains and a relatively low lying plateau. “The site’s inhabitants could hunt animals exploiting diverse habitats,” he said.

The team suggest that open-air sites like Ein Qashish may have been used by Neanderthals more than previously thought. They will now carry out more analysis on the artifacts found to build and even clearer picture of how the site was used—from how animals were exploited to the way tools were built and used. This includes the purpose of some unusual limestone slabs that appear to have been used as an anvil, “for purposes not yet known.”

Evidence suggests Neanderthals disappeared from the Levant about 50,000 years ago. “‘Ein Qashish dates very close to the end of this period [and] appears to be a site of repeated occupations,” Ekshtain said. “Each of the occupation hosted a range of general activities suggesting a complex and robust settlement system in the open air. The reasons for leaving the site or the region are still not clear.”