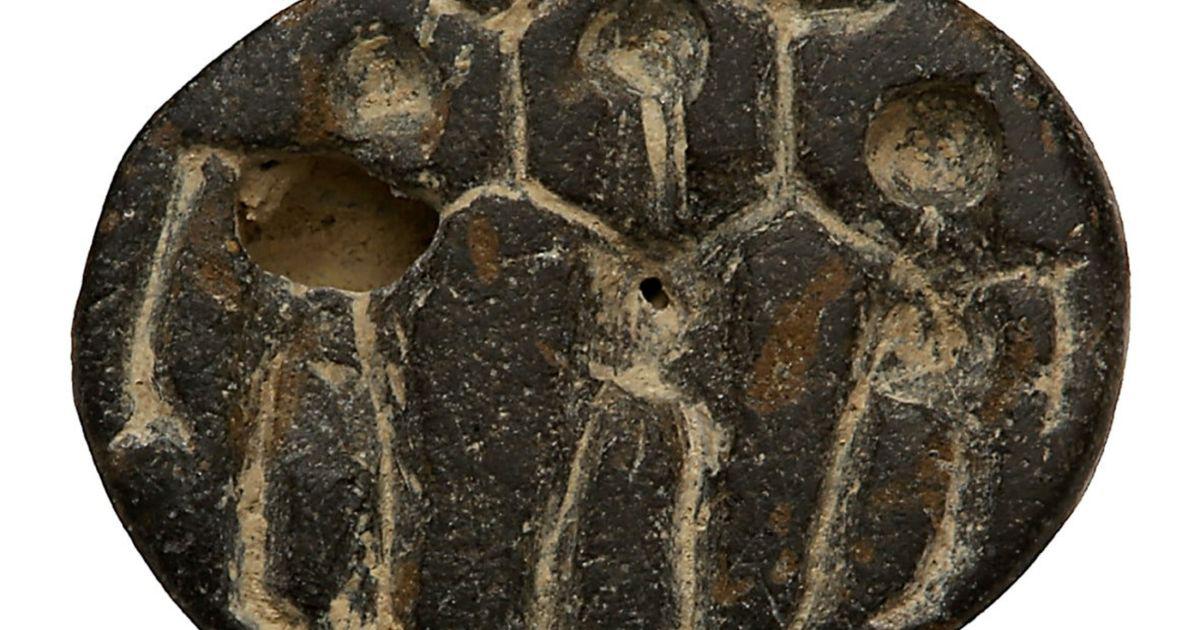 The town of Abel Beth Maacah was known in biblical times as a place for conflict resolution, we may divine from references in scripture. Now archaeologists have found a strange shrine that they think may have been associated with the “wise woman” of the city, mentioned in the bible. But rather than being just a clever elder – they suspect she may have fulfilled an oracular role.

The tell in which Abel Beth Maacah was identified lies just south of Israel’s border with Lebanon, near the town of Metulla. The archaeological mound, called Tell Abil el-Qameh, covers a huge 100 dunams in area.

In fact, archaeologists have uncovered evidence for a succession of religious cult practices spanning some 300 years. Numerous shrines were found, which, as is the norm for ancient spots of worship, were ornate in some fashion or other. But among the discoveries in recent excavations was an unadorned shrine, the only one of its type found in the town.

The reasons to associate the bare shrine with an oracle stem from puzzling biblical mentions of a “wise woman”. The archaeologists now suspect that at least in the case of Abel Beth Maacah, she was a local version of the divine oracles known from other cultures around the Mediterranean.

Various ruins found during the latest excavations, which began in 2013, have been roughly dated to the second and first millennia B.C.E. Aside from the shrine, the archaeologists found a large building complex dating to about 3,000 years ago that served diverse industrial, administrative and religious functions.  The dig is being co-directed by Dr. Naama Yahalom-Mack and Dr. Nava Panitz-Cohen of the Hebrew University of Jerusalem and Prof. Robert Mullins of Azusa Pacific University in Los Angeles.

The name Abel Beth Maacah means “watered field of the House of Maacah,” presumably because of the town’s proximity to the nearby Ijon River and numerous springs. Located at a cross-roads of the north-south road linking Egypt with Mesopotamia and an east-west route from Damascus to Tyre, Maacah was also a trade and storage hub, according to 2 Chronicles 16:4 (though there the town is called Abelmaim).

Among Abel its earliest mentions are Egyptian texts such as the Execration Texts (18th century B.C.E., listing the enemies of the pharaoh) as well as Thutmoses III‘s list of conquered cities (15th century B.C.E).

References to Abel-Beth Maacah in the Bible include conquest by the Arameans (1 Kings 15:20) and then by the Assyrians (2 Kings 15:29).

But the more intriguing mention from the perspective of the shrines is the drama involving a rebel against King David named Sheba ben Bichri, who fled all the way north to Abel Beth Maacah, hoping to escape David’s retribution. The king’s general Joab could have destroyed the whole city in his quest to vanquish the varmint.

First, though, David’s warriors commanded by Joab besieged Abel Beth Maacah, demanding that Sheba be extradited. Thereupon, a “wise woman” – told Joab: “Long ago they used to say, Get your answer at Abel, and that settled it. I am one of the peaceful and faithful in Israel. You seek to destroy a mother and a city in Israel” (II Samuel 20:18-19).

We don’t know what Joab felt about that, but the townspeople also heard her. They decapitated Sheba and pitched his head over the wall. And the city was spared (2 Samuel 20:14-22).

What has any of this to do with the newly unearthed “blank” shrine?

Solid evidence of the city’s status is right there. Archaeologists have found that in the second millennium B.C.E., Abel Beth Maacah was a flourishing city, with strong fortifications erected during the Middle Bronze Age II (1,750–1,550 B.C.E.). Those fortifications remained in use through the Late Bronze Age (1,550-1,200 B.C.E.), a time when most other cities in Canaan were unfortified.

Also from the Late Bronze Age, the archaeologists found a small jug containing a hoard of silver earrings and pieces of ingot, testifying to the inhabitants’ material wealth.

The city’s continuing rise to prominence in the Iron Age I (1,200 B.C.E. to 1,000 B.C.E.) may have owed much to the collapse that befell Hazor, the mighty Canaanite city-state only 35 kilometers to the south. Abel Beth Maacah at this time apparently became a major urban center, featuring large public buildings, and metalworking and trade. Its population clearly increased, possibly due to migrant influxes joining the local Canaanites, such as refugees from the destroyed city of Hazor, Arameans from Syria, and Israelites from the southern parts of Canaan.  (The future city of Dan did exist at the time but apparently was more of a village than an urban center.)

Among the cultic, if not oracular, discoveries in Abel Beth Maacah was a building with two rooms dating to the Iron Age I, with standing stones, benches and a small bamah (platform) and fragments of a bull figurine indicating its role as a shrine.  This structure was violently destroyed and never rebuilt.  A slightly later complex of buildings had another apparently cultic room, with standing stones, an offerings table, a cylindrical cult stand made of clay adorned with drooping petals, benches, mortars, and a unique plastered installation with two plastered basins.

Since there are no known parallels to date, the function of the basins is anybody’s guess, but it seems to involve liquid, based on the thick plaster coating the interior.

Yet another intriguing find at Abel Beth Maacah from slightly a later time is a jar with 425 animal knucklebones, called astragali. Found throughout the Ancient Near East, astragali were used as gaming pieces and for divination. In this case, the large number of knucklebones collected into one jar is quite suggestive of divination. This jar was found on a courtyard paved with stone, set on a low round podium, and has been dated to the 9th century B.C.E.

Abel Beth Maacah is also where archaeologists found the extraordinary sculpture of a head, complete with hairdo and beard, also dating to the 9th century B.C.E., which they think may be the earliest-known example of figurative art. The postulation is that if he was important enough to be pictured, he was a king, but 3,000 years later, we cannot be sure.

The shrine thought to be associated with an oracle was something completely different.

The Wise Woman of Abel-Beth Maacah

As the King James Version puts her words to Joab: “They were wont to speak in old time, saying, They shall surely ask counsel at Abel: and so they ended the matter.” – 2 Samuel 20:18.

The New Revised Standard Version phrases the same: “They used to say in the old days, ‘Let them inquire at Abel’; and so they would settle a matter.”

Who she was and the interpretation of what she said remain highly speculative. But the words hint at a practice of seeking out oracular advice.

Supporting that theory are the discovery of several cultic installations featuring aniconic standing stones, that is, stones with no devices or designs carved on them, that could have served as generic signs for any worshipers’ deity (or, alternatively, for ancestor worship or to commemorate important events, for instance).

It is thus possible that bare cultic installations anywhere indicate that divination and other forms of inquiry of the gods or ancestors took place. Abel Beth Maacah could have been a center for inquiring of the divine.

Yahalom-Mack and Panitz-Cohen note the difficulty of making a one-on-one leap from the text to the archaeological finds, since these words might reflect the reality of a different period, or could be a propagandist narrative.

“We can, however, use such finds to set the stage and help us to better envision the reality of ancient life as it is expressed in the Biblical text,” said Lawson Stone, professor of Old Testament studies at Asbury Theological Seminary, and member of the Abel Beth Maacah excavation team.

The Septuagint, a Greek translation of the Hebrew Bible from the 3rd century B.C.E., has a variant text of 2 Samuel 20:18 that also refers to Dan, as if Dan and Abel Beth Maacah were the two main centers in the north for divine inquiry, Stone says. “It is possible that the woman in this story is a leader in the community who was known, like Deborah in the central part of Israel, for settling disputes through inquiring of the deity. All of this is, of course, speculation, but I don’t think it’s too far into the realm of fantasy.”

In the ancient world “wise women” enacted a number of culturally diverse and socially important roles. Ancient Greece had scores of female sacred oracles, including the famed ones at Delphi, Delos or Dodona, where people would go to inquire of their gods with regard to political or military developments as well as private affairs. The prologue of the Sybilline Oracles (an ancient collection of oracular utterances written in Greek verse) lists ten female oracles by name.

In the ancient Near East, the wise woman also enacted multiple wondrous roles, including exorcist, freeing clients from demons. As an incantation-writer, she preserved and interpreted myths and legends of the past she also served as a purification priestess.

“The problem here is that we have no idea of this wise woman’s identity. She is very enigmatic. Could she have been an oracle? Perhaps. But this is only guessing,” Mullins says. “We think that Abel served some sort of peacemaking or settling disputes role and perhaps there were religious dignitaries of some sort that participated in this. But the biblical text is too ambiguous and we still lack sufficient Ancient Near East parallels to clarify the roles of wise women.”

“A variant text of 2 Samuel 20:18 (the Greek Septuagint) has reference also to Dan, as if Dan and Abel Beth Maacah were the two main centers in the north for divine inquiry. It is possible that the woman in this story is a leader in the community who was known, like Deborah in the central part of Israel, for settling disputes through inquiring of deity. All of this is, of course, speculation, but I don’t think it’s too far into the realm of fantasy,” says Lawson Stone, professor of Old Testament studies at Asbury Theological Seminary.

Some two hundred years after the military campaign of Ben-hadad of Damascus, during the reign of the Israelite king Pekah Abel Beth Maacah was captured by King Tiglath-Pileser III of Assyria, and its inhabitants were sent into exile (2 Kings 15:29)..

Read the source article at Haaretz