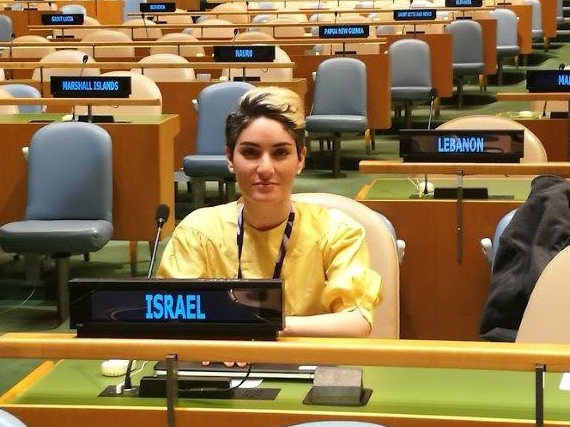 As the former chairwoman of Israel’s National Student and Youth Council as a high school student, Shay Bialik ’14 was used to fighting for what she felt was right. During the eventful 2011 summer, Shay met some of the people who would later provide her with a warm welcome when she started studying at the Hebrew University in Jerusalem.

“Attending Hebrew University (HU) wasn’t my top choice”, she said. “It was my only choice.” For Shay, HU is the top university in Israel, one of the best schools globally for international relations and history, and is in her favorite city in the world.

After learning of her arrival, leaders of the Labor Party’s university organization (who had heard about the fiery young woman from other Hebrew University students) immediately recruited her to their cause – where she became the spokeswoman for the organization, as well as the coordinator for the Knesset internship program. Along with her work in the Labor Party and her studies, Shay also worked for public figures including Jerusalem City Councilwoman Merav Cohen and Mayor Nir Barkat, as well as in the Knesset.

In addition to getting a university education, Shay’s international career began at Hebrew University. She founded the university’s Hasbara Operations room during Operation Pillar of Defense in 2012, where she fought against false news stories.

Shay later went to study in Paris as an exchange student at the prestigious Sciences Po University. Upon completing her studies, she began working as an advisor to the Israeli ambassador at the Israeli Mission to the Council of Europe, The Organization for Economic Cooperation and Development (OECD), and UNESCO in Paris – a role she held for almost three years.

In 2017 Shay relocated to New York, where she works for the Israeli Mission to the United Nations as a policy advisor. She is also currently studying for a master’s degree in International Relations at the New School.

Currently living with her husband in New York, Shay still dreams of returning to Jerusalem. Shay notes “My time at the Hebrew University and in Jerusalem provided me with everything I could have ever wanted and wished. It was life, it was liberty, and it was happiness at the palm of my hands. And even if I barely had time to eat, I still keep in close contact with faculty and friends whom I now consider my Jerusalem family.”