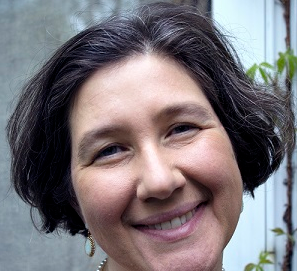 When Beth Kissileff was a sophomore in college, she took a ‘Bible in Literature’ class. Due to her limited knowledge of Hebrew, she assumed she was likely the least knowledgeable person in the room. She realized that to know more about Judaism and Jewish texts, she needed a better grasp on Hebrew and the best way to learn a language is through immersion where the language is spoken. After she graduated with her B.A. in 1990, she and her husband enrolled in the Hebrew University of Jerusalem (HU).

Beth loved her classes and teachers at HU and enjoyed studying abroad with a diverse group of students who were equally engaged and highly educated. As she traveled and studied in Israel, she realized that being in the place where biblical stories occurred adds such a richness and dimension that couldn’t be replicated anywhere else. The highlight of Beth’s year abroad was the university’s Bible department tiyul (trips) to sites that were described in various sacred texts.

When she returned to the U.S., she earned a Ph.D. in comparative literature at the University of Pennsylvania. Today, Beth is an accomplished writer and journalist who seeks to capture the liveliness and excitement of Bible study through her writing. She edited the anthology Reading Genesis: Beginning (2016) and is the editor of the forthcoming anthology Reading Exodus (2019). The origins of her books Questioning Return (2016) and I’m Not Here for Myself (coming in spring 2019) date to the time she spent traveling in Israel and studying at HU. She shared, “In my book Questioning Return, the main character enrolls into HU’s ulpan program. There are a few scenes where she meets with her advisor, studies in the library, and eats in the meat cafeteria with the incredible view of Mount Scopus. The book is an armchair travel to HU and Jerusalem!” Beth is also working on a volume of linked short stories, They Truly Loved Us and a second novel, The Life I was Supposed to Have. She has been particularly thrilled to write for the English version of the 929 website, where her work can be found along with her former Hebrew University professors Yair Zakovitch and Avigdor Shinan.

Beth’s writing has appeared in the Michigan Quarterly Review, Religion News Service, Haaretz.com, Slate.com, the New York Times, The Tower, the Jewish Review of Books, Tablet, the Forward, the Jerusalem Report, the Jerusalem Post, and the New York Jewish Week among others. She has taught Hebrew Bible, Jewish studies, English literature and writing at the University of Pittsburgh, Carleton College, the University of Minnesota, Smith College, Mount Holyoke College, and Shaw University. She has received fellowships from the Corporation of Yaddo, the Ragdale Foundation, the Virginia Center for Creative Arts, and the National Endowment for the Humanities.

Beth currently lives in Pittsburgh with her family, but her heart is set on Israel and her experiences at Hebrew University. Beth exclaimed, “My husband and I decided that when we retire we want to come back to Jerusalem and again, sit in on classes at the Hebrew University, as well as the many other places to learn around town!”

Visit her online at www.bethkissileff.com.