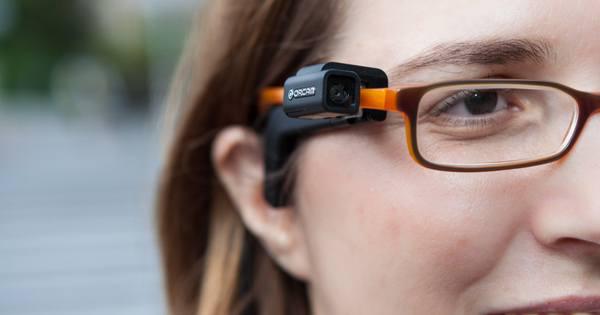 A new device made up of a tiny camera, an earpiece and a very powerful wearable computer could drastically improve the lives of some 21 million Americans living with a visual impairment.

OrCam is not primarily a mobility aid, so it won’t replace a cane, but what it can do is help a wearer recognize and interpret the world around them by reading printed text off a variety of surfaces and recognizing products and faces.

OrCam was founded in Israel by Amnon Shashua, a computer science professor at Hebrew University in Jerusalem. The device is based on computer vision algorithms he pioneered with another computer scientist, Shai Shalev-Shwartz, and Dr. Yonatan Wexler, a former graduate student who is now senior vice president of research and design for OrCam.

Here’s how it works: The device is attached to a pair of glasses using a tiny magnet. While wearing the glasses, the user can then point to anything with their finger, be it a product at the grocery store or an article in the newspaper. OrCam will interpret the object or text via the in-ear microphone. One of its most helpful features lies with money recognition. Hold up a $5 bill any which way, and OrCam will recognize it. This helps visually impaired people while they are out and about at the store.

“It is unobtrusive so people feel comfortable wearing it. It is small and mobile so it is helpful everywhere. The battery lasts all day, so it becomes a useful tool for daily life,” Wexler told From The Grapevine. “It has the most intuitive user interface: Just point at what you want the device to tell you – there is no need to fiddle with yet another device.”

Faces of friends, family and other people a user regularly encounters can be remembered by the device. The device can be used by people of all ages with a variety of visual impairments. OrCam’s youngest user was just 7 years old when Wexler delivered the device to him in Seattle. In the video below, he’s seen reading a Harry Potter book in print for the first time:

“The wonderful thing about the OrCam device is that it can be used by anyone of any type of vision loss, from people who are visually impaired to those with no light perception,” New York-based optometrist Dr. Bryan Wolynski told From the Grapevine. “My patients not only are able to read again, recognize products and faces, but are now part of a community of individuals who can count on being heard.”

OrCam launched in the U.S. in 2015 and is also available in Canada. They recently unveiled an upgraded model at the Consumer Electronics Show in Las Vegas earlier this month. The company offers in-person training to all new users.

While OrCam was developed specifically with the visually impaired in mind, the company is also adapting the product for other markets. Hoping to broaden their audience, the Israeli-based company recently announced a new digital personal assistant that clips onto a shirt or necklace and could give Apple’s Siri or Google Glass some competition down the road. “We envision an always-on, personal assistant as the next step in wearable technology,” Shashua told the Wall Street Journal .