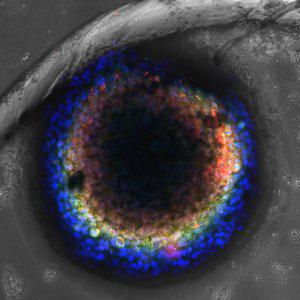 The Rosetrees Trust Interdisciplinary Prize for 2017 has been awarded to two scientists from the Hebrew University of Jerusalem, Professor Yaakov Nahmias and Professor Nir Friedman. This is the first group from outside the United Kingdom to win the prize. The award was presented at the 30th Rosetrees Trust Anniversary Symposium on September 14 at the UCL Institute of Child Health in London. Professors Nahmias and Friedman won for their research proposal to engineer a platform that mimics the physiological dynamics of human metabolism. The circadian rhythm or “body clock” is a daily cycle that regulates many physiological processes, such as telling our bodies when to eat or when to sleep. With funding from the Rosetrees Trust, the two scientists will lead a team of Hebrew University researchers in combining Professor Nahmias’ groundbreaking organ-on-chip platform with Professor Friedman’s key understanding of molecular networks. This interdisciplinary partnership will unravel the complex interplay between changing metabolism and its underlying genetic regulation in human cells, replacing current animal models that lack clinical relevance. The research will be instrumental to drug development, offering a route to the rational design of therapeutics for obesity, fatty liver disease, and type 2 diabetes. The Rosetrees Trust is a private, family-funded charity, formed in 1987 to support medical research. Rosetrees provides grants to fund outstanding research projects across all areas of human health and disease. The theme of the 2017 Rosetrees Interdisciplinary Prize is to promote collaborative research between medicine and engineering. The prize is worth up to £250,000 over three years. The prize is given each year to two researchers from different disciplines with the purpose of inspiring collaborative research between medicine and another field, in the hopes of pushing forward medical breakthroughs in the realm of human health. This year, for the first time, two sets of research teams impressed the Rosetrees Trust panel of judges enough to issue a joint prize: in addition to the Hebrew University team, Dr. James Dear and Dr. Maiwenn Kersaudy-Kerhoas from Edinburgh University won for their proposal to develop a prototype device to rapidly diagnose drug-induced liver damage. “Each year Rosetrees seeks the best research to support and every year the quality is a little better,” said Richard Ross, Chairman of the Rosetrees Trust. “This year the judging panel found it extremely hard to choose a winner because there were so many outstanding projects.” Professor Yaakov Nahmias is the founding director of the Alexander Grass Center for Bioengineering, which brings Hebrew University researchers together to develop transformative technologies and an ERC-funded tissue engineer at the Alexander Silberman Institute of Life Sciences. His research is focused on the integration of tissue engineering, microfluidics, and metabolism. Projects include nanotechnology-based diagnostic devices and microchip alternatives for animal and human testing recently commercialized to Tissue Dynamics Ltd., a startup company that was established by Professor Nahmias together with Yissum, the technology transfer company of the Hebrew University. Professor Nir Friedman is a professor at the Rachel and Selim Benin School of Computer Science and Engineering, and the Alexander Silberman Institute of Life Sciences, at the Hebrew University. His research combines machine learning and statistical learning with systems biology, specifically in the fields of gene regulation, transcription, and chromatin. He has received two ERC advanced awards. Professor Yaakov Nahmias said, “The Rosetrees Trust Interdisciplinary Prize is instrumental in bringing scientists of different disciplines together. It will enable us to not only build a groundbreaking model of human physiology on a chip but also to leverage the advanced computational resources needed to understand the vast amount of data our platform will generate, in the hope of developing critical new therapies for metabolic diseases such as obesity and diabetes.”