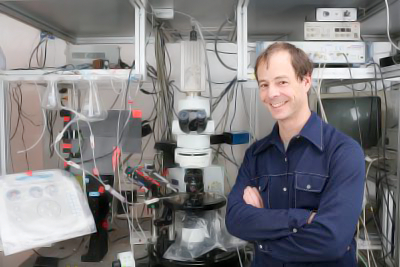 Dr. Ami Citri was born and raised in Jerusalem to a family of biological scientists. Ami’s mother, Dr. Naomi Zyk, and father, Professor Nathan Citri, worked together at the Hebrew University’s medical school, studying the enzymes responsible for bacterial resistance to antibiotics. His brother, Dr. Yoav Citri, completed Ph.D. studies at the Life Sciences Institute of the Hebrew University and was later a senior scientist at The Weizmann Institute, studying the genes enabling brain plasticity.

Following his military service as an intelligence officer, Ami studied biology at the Hebrew University in the “Etgar” program for exceptional students, finishing his degree requirements summa cum laude. He continued his M.S. and Ph.D. studies under the supervision of Professor Yosef Yarden at the Weizmann Institute, studying the molecular mechanisms leading to the rapid division of cancer cells. During these studies, Ami identified novel approaches to therapeutically target cancer cells and developed new methodologies to study genetic networks important for the function of all human cells. For his postdoctoral training, Ami moved to Stanford University, to work with Professor Robert Malenka, a world-renowned leader in the study of brain plasticity in the context of drug addiction. In the Malenka lab, Ami acquired experience in molecular and cellular neurophysiology relevant to biological models of drug addiction, and developed new molecular approaches to study genetic and neuronal networks important for the formation of addiction.

In August 2012, Ami established his independent research group at the Edmond and Lily Safra Center for Brain Sciences and the Alexander Silberman Institute for Life Sciences at the Hebrew University of Jerusalem, where he focuses on studying the genetic networks that underlie addiction.