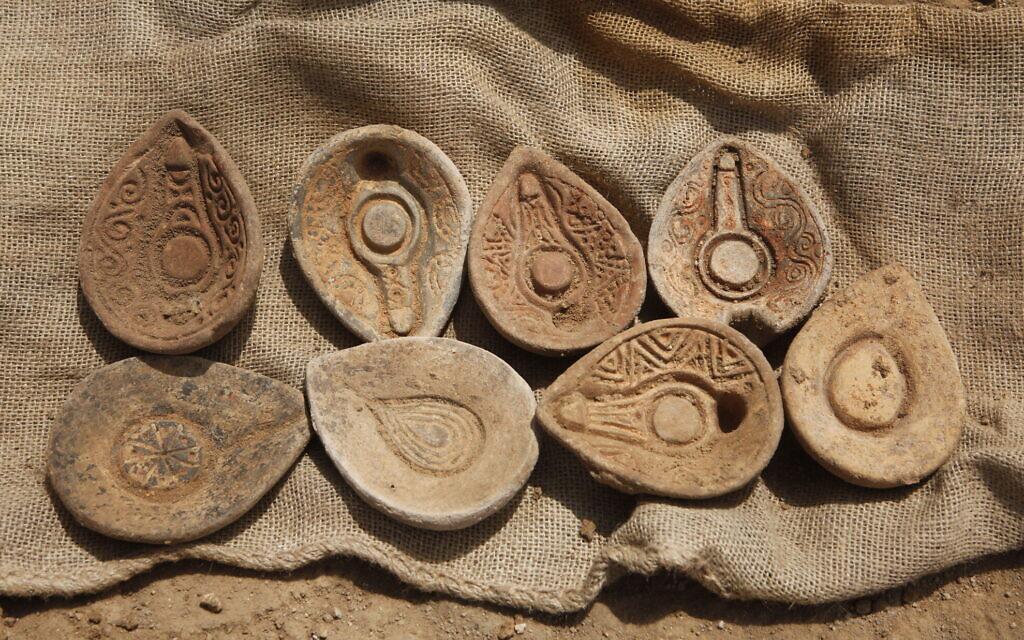 A complete rare, early Islamic-era oil lamp workshop from ancient Tiberias on the shores of the Sea of Galilee has gone on display at the Israel Museum in Jerusalem.

Ten complete lamp molds, a kiln, and several intact, unused oil lamps dating from circa the mid-7th century to the 11th century were found under debris from a series of earthquakes during excavations this summer, conducted by the Hebrew University Institute for Archaeology’s Israel Archaeological Services.

The complete assemblage of the workshop offers “a rare glimpse into work processes in our area in ancient times,” said Liza Lurie, the Israel Museum’s curator for Islamic art and archaeology.

Portions of the find — some still covered with dirt — are now on display in a temporary exhibit at the entrance to the Israel Museum’s archaeology wing, just in time for Hanukkah, a holiday infused with symbolism around the burning of oil lamps.

In the rush to show the collection in time for the Festival of Lights, the items have not yet been scientifically documented or studied, although they were measured and photographed in situ.

Visitors to the exhibit will be able to glean how craftsmen turned clay into lamps more than a millennium ago — skills that are increasingly relevant as artisans return to traditional roots in their work, Lurie said.

The lamps and molds are etched with ornate floral and geometric designs, including a five-sided star. One mold is etched with the Arabic word for God, “Allah.”

They were discovered in a neighborhood of residences and workshops that was destroyed during a series of earthquakes during the 11th century, according to a Hebrew University statement.

Oren Gutfeld, the head of the Israel Archaeological Services, noted that the findings indicate a style of living in which craftsmen and their workshops were integrated into neighborhoods.

In addition to the ceramic workshop, which included a kiln, the archaeologists uncovered five septic tanks for human waste, and a well dug down to the level of the Sea of Galilee, some 3.5 meters (11.5 feet) deep.

In what has the potential to significantly change how corona patients are being treated and the severity of the disease,...
READ MORE
Partnerships
NEWS