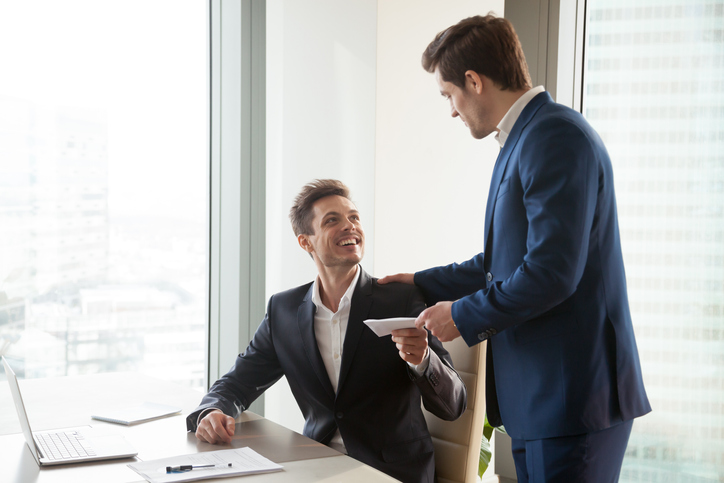 Bonus Time? Better Hope the Boss is NOT Your Friend, Study Finds

Bonus Time? Better Hope the Boss is NOT Your Friend, Study Finds

However, a recent study published in the Journal of Experimental Social Psychology by Hebrew University of Jerusalem’s School of Business Administration Professor Shoham Choshen-Hillel, and her colleagues Alex Shaw at the University of Chicago and Eugene Caruso at UCLA, suggests that in public situations when bosses are concerned with appearing impartial, they often act with bias against their friends.

In a series of eight studies using workplace scenarios, the researchers found that when managers had to decide whether an employee deserved a bonus, they were less likely to award one to a deserving employee who was also a friend if news of the bonus would be made public.  They feared being seen as playing favorites.  Instead, they often awarded the bonus to a less-deserving but non-friend employees.

This fear, even when an employee-friend deserved the bonus based on merit, causes bosses to over-correct against their friends.  “Bosses systematically treat their friends in a worse manner than they would treat their non-friends,” explained Choshen-Hillel. “This concern with nepotism, even when there is a merit-based justification, can cause bosses to throw high-performing friends under the bus in an effort to avoid charges of favoritism.”  If, however, bosses were assured that bonuses will remain private, they had no problem giving their deserving friends the reward, the study showed.

In one experiment, participants acting in the role of “boss” were faced with two employees: Mark and Dan.  Both employees had the same job description and salary, and each was awarded a $200 bonus.  The boss was given the option to award an employee with an extra bonus of $100 dollars.  To make their decision, the boss was asked to rely on input from fellow staff members.  Mark received better reviews than Dan.  When study participants/”bosses” were told that Mark is their friend and that giving him the extra bonus would be public knowledge, they chose to give him the deserved bonus only 61% of the time. However, when participants were told their bonus decision would be kept private, they chose to give their friend Mark the extra bonus 89% of the time.  Alternatively, when Mark was described as an employee and not a friend, participants awarded Mark the bonus 88% of the time if their decision was made public and 87% when it was kept private.

Study participants’ concern over how their bonus decisions would be viewed by others in the office, was warranted.  Choshen-Hillel and her colleagues did an experiment in which participants were briefed on the boss’s bonus options (as described above) and their subsequent decisions.  They rated the bosses on a scale of 1 -7, (1=Strongly Disagree, and 7=Strongly Agree) as to whether the boss had acted fairly.

Choshen-Hillel and her colleagues note that not all managers “navigate the dynamics between impartiality and favoritism” by over-correcting in a biased way against a friend.  In the experiments, many participants did choose to award bonuses based on merit alone.  However, the researchers’ overall findings “highlight the delicate pressure that bosses face when they are faced with the competing values of fairness and friendship.”

FUNDING: The Social Enterprise Initiative at The University of Chicago Booth School of