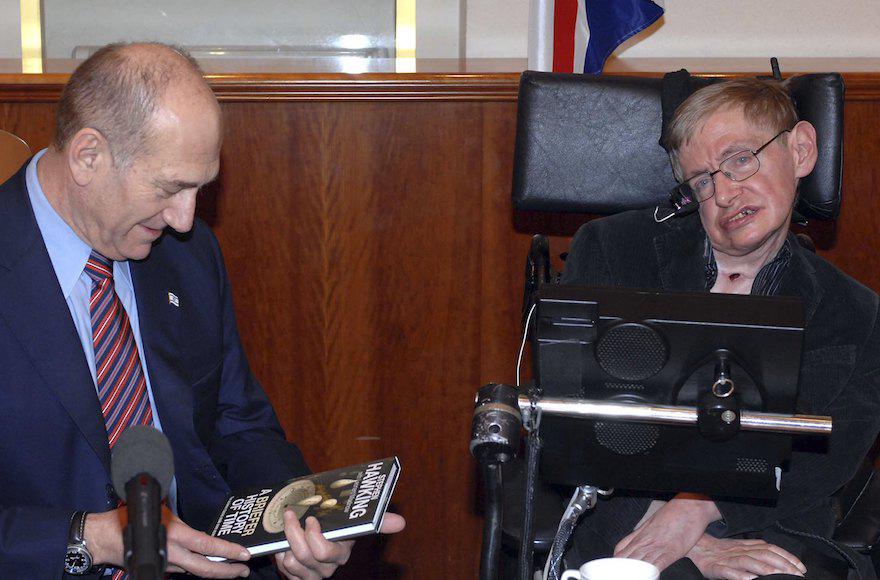 JERUSALEM (JTA) — Dr. Stephen Hawking was a rare and inspirational man whose deep insights into the mysteries of the physical universe were matched only by his courage in the face of a cruel, debilitating illness, which he met with good spirit and a unique sense of humor.

In the wake of his passing, those who have commented on his legacy have focused not only on his work as a scientist and a communicator of science, but also on his display of human spirit.

At the Hebrew University of Jerusalem’s Racah Institute of Physics, our interactions with Dr. Hawking were marked by our shared love of the discovery of the physical universe and our aspiration for creating a better world.

Dr. Hawking’s most famous theoretical argument, that matter can escape black holes, was intimately related to the ideas of the late Professor Jacob Bekenstein from the Hebrew University of Jerusalem. A black hole is the most compact form of matter, as implied by Einstein’s theory of gravity. Surrounded by a seemingly one-way horizon, it is one of the most mysterious objects in nature. In 1972, Bekenstein (1947-2015), then a doctoral student at Princeton University, suggested that black holes might have properties of heat (more precisely entropy, known today as Bekenstein-Hawking black hole entropy).

Dr. Hawking was among the scientists who were skeptical. He believed that black holes absorb everything, yetnothing can escape them and therefore their temperatures would have to be absolute zero. But in 1974, he was led to the theoretical argument that once the effect of quantum physics are taken into account, black holes are not truly black. Dr. Hawking theorized that some radiation does escape from a black hole, and that this radiation represents (non-zero) temperature, just like a heated metal bar would glow in the dark.

At first he resisted this conclusion because it conformed to Bekenstein’s idea. However, he ultimately realized that both are correct and that a new and consistent understanding of black holes had emerged. This radiation is called Hawking radiation, and it remains Dr. Hawking’s single most important contribution to the field of theoretical physics.

So it was Hawking, building off and confirming Bekenstein’s work, who established the theoretical foundation for black hole thermodynamics, a deep connection between gravity and quantum physics that is a cornerstone of our contemporary understanding of these phenomena.

Since his passing, some have commented on Dr. Hawking’s relationship with the State of Israel. Over his long career he visited Israel multiple times, accepting the prestigious Wolf Prize in physics in 1988 and, most recently, as an honored guest of the Israel Academy of Sciences in 2006.

Unfortunately, in 2013 he was represented to have made a decision with which we obviously disagree — to contribute to an academic boycott campaign against Israel. After initially agreeing to attend a conference led by then-President Shimon Peres, Dr. Hawking later canceled his participation. While misguided, I believe this decision was made not out of animosity, but rather with the intention of trying to foster a solution to the Israeli-Palestinian conflict.

I was part of a group of Israel theoretical physicists who sent a message to Dr. Hawking to formally protest his decision.

We wrote, in part, “We believe in the goal of a peaceful and prosperous coexistence of Israelis, Palestinians and other peoples. We moreover believe that the freedom of thought, expression and a free sharing of information are some of the core values of science as well as of democracy. A boycott, on the other hand by its very nature, suppresses dialogue and the free exchange of ideas for all parties involved, and we do not consider it helpful for a peaceful resolution of the conflict.”

Putting aside this disagreement, it was both an honor and a pleasure to have met Dr. Hawking on several occasions, and I will always remember his wit and how he faced his challenges with a smile, his typical defying grin. His science will be studied by generations to come and his spirit will continue to inspire millions around the world.

(Dr. Barak Kol is a professor of physics working on theories of fundamental laws of nature at the Hebrew University of Jerusalem, where he serves as head of physics studies. His research has contributed to Einstein’s theory of gravity and to Quantum Field Theory.)

The views and opinions expressed in this article are those of the author and do not necessarily reflect the views of JTA or its parent company, 70 Faces Media.