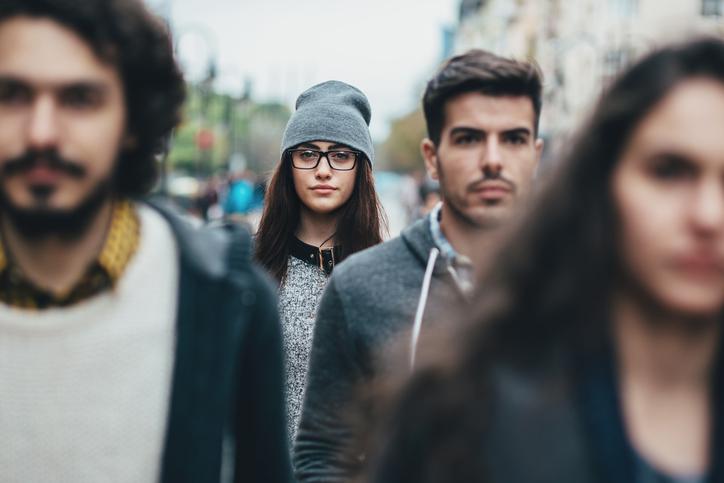 How the Unconscious Mind Picks Out Faces in a Crowd

How the Unconscious Mind Picks Out Faces in a Crowd

December 18, 2017 — Imagine you’re walking down a busy area like Times Square in New York.  There are tons of people around.  As you make your way through the crowd, your brain notices several faces but ignores the rest.  Why is that?  What are the processes that determine which faces our brain “chooses” to see and those it allows to fade into the background?

Today, a new study published in the prestigious journal Nature Human Behavior by Professor Ran Hassin, the Hebrew University of Jerusalem (HU)’s James Marshall Chair in Social Psychology and member of its Federmann Center for the Study of Rationality, along with HU graduate student Yaniv Abir and colleagues Professor Alexander Todorov of Princeton University and Professor Ron Dotsch, formerly of Utrecht University in the Netherlands, describes how the unconscious mind processes human faces and the two types of faces it chooses to consciously see, namely: those associated with dominance and threat and, to a lesser degree, with trustworthiness.

With the onslaught of stimuli—images and rapid flashing—it took the brain a few seconds to understand that it was seeing a face and then to “transfer” these images to the conscious brain for processing. The researchers observed that the facial dimensions that were most quickly registered by participants were ones that indicated power and dominance.

“Walking around the world our unconscious minds are faced with a tremendous task: decide which stimuli ‘deserve’ conscious noticing and which do not,” explained Hassin. “The mental algorithm we discovered deeply prioritizes dominance and potential threat,” he noted. “We literally saw the speed with which these images broke through the unconscious mind and registered on a conscious-level with each key press.”

For the past decade, Hassin has focused his research on the human unconscious, specifically decision making, memory, motivation, and how opinions are formed. “This study gives insight into the unconscious processes that shape our consciousness,” Hassin shared. “These processes are dynamic and often based on personal motivation. Hypothetically, if you’re looking for a romantic partner, your brain will ‘see’ people differently than if you’re already in a relationship. Unconsciously, your brain will ‘prioritize’ faces of potential partners and deemphasize other faces. Likewise, the same might be true for other motivations, such as avoiding danger. Your eyes might pick out certain ‘menacing’ faces from a crowd and avoid them.”

Looking ahead, Hassin hopes these findings can pave the way towards a better understanding of autism, PTSD, and other mental disorders.  “It might be possible to train and untrain people from perceiving certain facial dimensions as threatening. This could be helpful for those suffering from PTSD or depression. Likewise, we could train people with autism to be more sensitive to social cues.”

This work is not only groundbreaking in revealing how our unconscious minds work but in providing scientists with a new set of tools to approach behavioral and mental disorders, as well.

Read the source article at AFHU