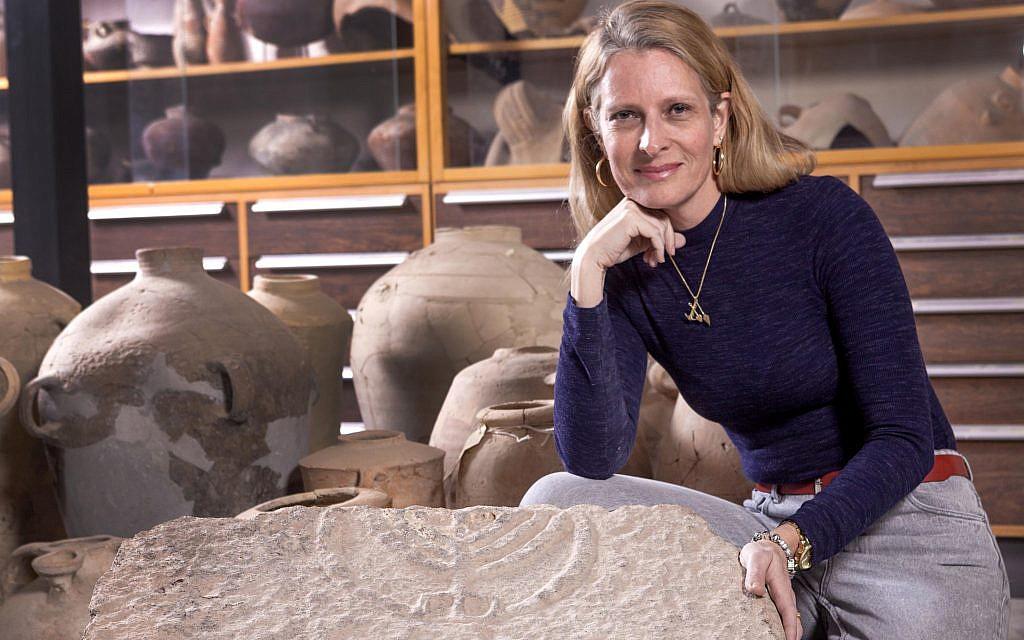 Why would Crusaders decorate a staircase with the carving of a menorah? This archaeological mystery — almost two millennia in the making — was recently solved, seven years after the Jewish symbol was discovered in a Hebrew University excavation of ancient Tiberias. The massive menorah, originally carved on a basalt tomb door, is tangible evidence of the city’s dramatic historical periods in the past centuries, under the world’s three major monotheistic religions.

The 68×78-centimeter (27×31 inch) seven-stemmed menorah was uncovered in a dig led by the Hebrew University’s Dr. Katya Tzitrin Silverman, which has been ongoing since 2009. The door the menorah decorated was typical of a Jewish tomb from circa 150-350 CE, said Silverman in conversation with The Times of Israel on Monday. After the fall of the Second Temple in 70 CE and the expulsion of Jews from Jerusalem, Tiberias was a center for Jewish life. It is thought that the Sanhedrin, the court of Jewish law and scholarship, sat in Tiberias from circa 190 CE. Following Muslim conquest in 635 CE, the city became a seat for the early caliphate. It was during this period, archaeologist Silverman said, that the menorah door was reused as the base of a mosque, which was built on an earlier mosque, said Silverman. Because the door was not found in situ, researchers cannot exactly pinpoint its provenance. However, said Silverman, it is clear that the use of this door by the Muslims in building a mosque was highly intentional. The mosque, she said, also contained reused pagan and Christian pillars, which were put on display as corner pieces. These materials taken for intentional secondary use are called “spoila,” said Silverman. They are trophies, a way of clearly stating, “We’re building our structure on the backs of those who came before us,” she said. “There is an expression of victory and inheritance” in their use, she said. Interestingly, said Silverman, during the team’s excavations, it was discovered that there was a church located next to the mosque which used the spoila. According to an inscription found at the church’s nave, it was still in use until at least the 10th century. “There was only a street between them,” she said, adding that although they’ve found remains of what appears to be a pagan temple, the team has not yet found a synagogue on the site of the ancient religious hub. “It’s strange to think that in Israel we have one of the most important excavations for early Muslim mosque architecture,” said Silverman.

The mosque that was built was upon the menorah was destroyed in an earthquake in 1068. Subsequently, its building materials were reused by the Crusaders and so our menorah became the decoration for a staircase in a room in a sugar factory. Calling it Israel’s “first industrial revolution,” Silverman said that after the crop was introduced under Muslim rule, by the Crusader period, the whole area of the Jordan and Ginosar Valleys was cultivated for sugar production. The heart of residential Tiberias had by this period moved north and the sugar production was done on the outskirts of the city. Silverman said that the menorah’s meaning as a Jewish symbol is not likely to have been understood during the Crusader period. Its use as a step in a secular sugar factory was, if anything, “pragmatic” — a bittersweet end to the menorah, which started its life on a Jewish tomb.