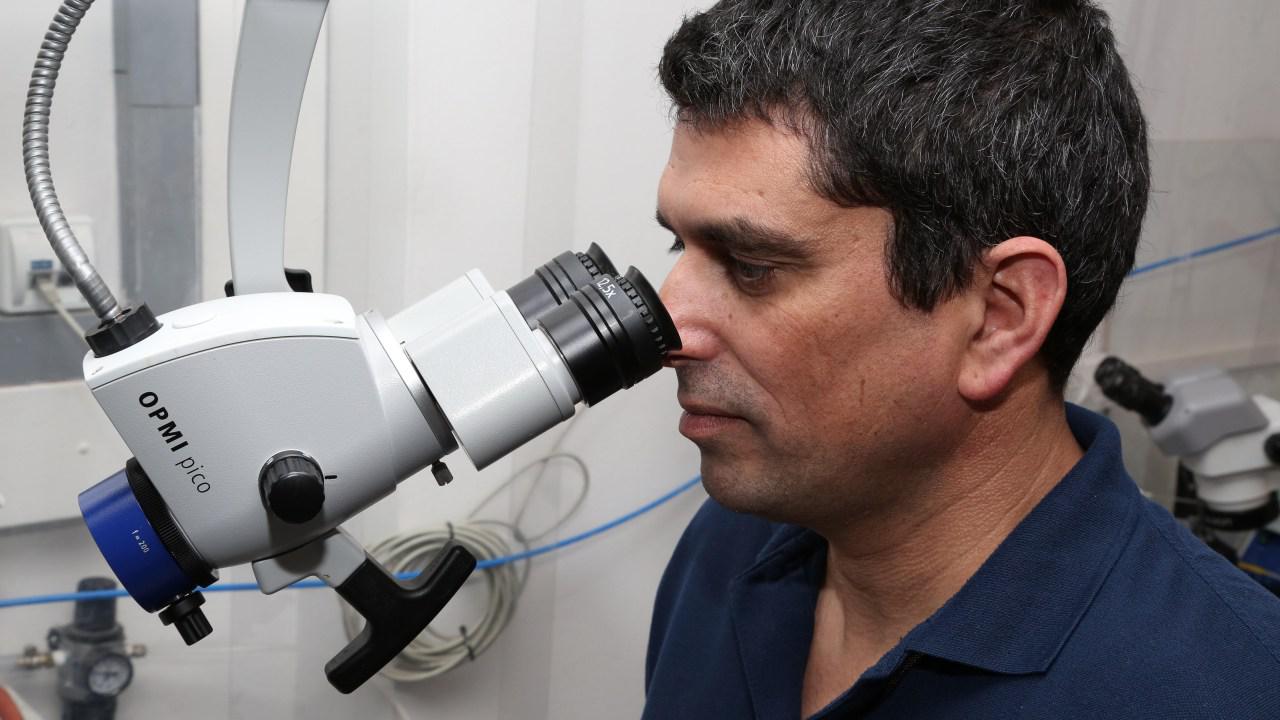 Ask Adi Mizrahi if he loves his work and his answer is a no-brainer.

“I’m absolutely convinced I have the best job in the world,” said Mizrahi, a neurobiologist, award-winning scientist and the director of the Hebrew University’s Edmond and Lily Safra Center for Brain Sciences.

Mizrahi, 47, now on sabbatical at Stanford University, is taking a year to talk to other scientists and learn about cutting-edge research techniques he can bring back to Israel. It’s part of his philosophy of interdisciplinary science, which he believes is crucial for understanding the brain.

“I think it is a multidisciplinary problem,” he said. “You cannot neglect one side and expect to solve the problem.”

It’s an approach he uses at the Center for Brain Sciences, which brings together physicists, neurobiologists, psychologists, computer scientists and engineers to collaborate on research. The cross-discipline point of view is essential because the brain is just too complicated to be understood by one approach. “If you only look at behavior, you’ll never know what the cells are doing,” Mizrahi said.

Mizrahi, the author or co-author of more than 25 papers, with titles such as “Distinct Spatiotemporal Response Properties of Excitatory Versus Inhibitory Neurons in the Mouse Auditory Cortex,” does what he calls “basic research.” That means that it’s not dedicated to finding practical solutions for immediate problems. “We do it for the sake of knowledge,” he said.

“We do it for the sake of knowledge.”

But sometimes results come anyway. For example, the center — not Mizrahi personally — has made splashy headlines for therapies such as deep brain stimulation, a treatment for Parkinson’s disease.

In 2009, Mizrahi won the Sir Zelman Cowen Universities Fund Prize for Discovery in Medical Research, which goes to a scientist under 45 at Hebrew University or the University of Sydney, in alternate years. The award honored Mizrahi for his work on new approaches that are “essential steps towards therapies which will allow the regeneration of brain structures from stem cell technology,” according to the prize website.

Hebrew University’s brain sciences center was founded in 2009 with $20 million in funding from the Edmond J. Safra Foundation. In 2015 this was increased by another $30 million, a hefty chunk of the center’s $150 million initial budget. Next year, the center will move into a new 156,000-square-foot home, the Goodman Brain Sciences building. (The new building will be the largest neuroscience center in Israel and one of the most ambitious in the world, according to Hebrew University.)

Until then, Mizrahi says his time as a visiting professor at Stanford, where he can focus on studying and learning about techniques like revolutions in RNA sequencing, is a gift and a privilege. But he is also looking to the future, including to students he and others are training back at the Center for Brain Sciences.

He said it’s those “the scientists of tomorrow” who are growing up within the interdisciplinary approach, who will be able to take research even further with their intuitive understanding of how to approach the brain from many points of view. But once they become scientists, they’ll find it’s a hard but rewarding road, where being ready to fail again and again is a prerequisite for the job.

“Science is not for everyone,” Mizrahi said, even if he’s sure that it’s definitely for him.