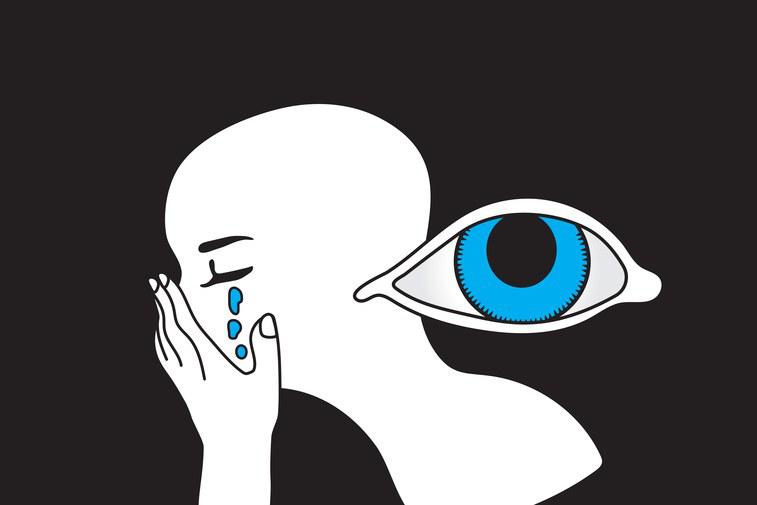 Sammy Nickalls
OCT 3, 2017 4:00PM EDT
On Monday morning, thousands of Americans woke up to the news of a horrific mass shooting on the Las Vegas strip, in which more than 50 people were killed and over 500 injured on Sunday night at a country music performance. Social media was almost exclusively filled with responses of shock, horror, and grief as Americans attempted to wrap their minds around this gruesome event, while acknowledging a sickening truth: this is not the last time our country will experience senseless violence at the hands of a white man with a gun.

Which leads us to the question: When you have anxiety and want to stay connected to the nation’s events, how do you cope with increasingly disturbing news?

Talkspace advisory Board Member Iris Reitzes, Ph.D., a clinical psychologist, marriage and family therapist, and emeritus lecturer at the Hebrew University in Jerusalem, told Teen Vogue that the interconnectedness of social media “without a doubt” has an effect on people with anxiety. “We’re constantly being inundated with distressing news about the world, most of which is updated in real time,” Reitzes said. “When something like the Las Vegas shooting occurs, we not only read about it on news outlets, but are also forced constantly to read other people’s reactions all over social media.”

Reitzes pointed out that those who observe trauma via their newsfeeds are affected because they “aren’t even able to disassociate.”

“Social media puts us all in the position of being observers of trauma, forced to identify with other people’s anxiety, but without any ability to distance ourselves from it,” she explained.

Reitzes added that constant access to the news in the 21st century “makes us feel more out of control.”

A particularly disturbing aspect of the Las Vegas shooting was that victims were simply enjoying a seemingly innocent country music show. “Mass murderers like the Las Vegas shooting are unexpected, dramatic, and massive, making people feel like they can’t go anywhere safely,” she explained. “Yet statistically, there’s a great chance that one will die from a car accident, or even cancer, as compared to a terrorist attack.”

With that in mind, this is how to cope with tragedy when you have anxiety.

Reitzes suggests using facts such as the aforementioned, which is considered a form of cognitive behavioral therapy (CBT) — a technique used to challenge distorted thoughts. “Most people don’t realize they are accepting life’s uncertainties on a daily basis, whether that’s the potential for a car accident or a cancer diagnosis,” Reitzes said. “That’s because we don’t hear about everyone who gets cancer on the news.”

Sometimes, using concrete facts can feel cold, but it’s important to stay grounded if you want to stay plugged in and make a difference. “We always live in a state of uncertainty, and while that may produce anxiety, it helps keep things in perspective in the wake of mass tragedies,” she explained.

Instead of getting your news from Twitter or Facebook, Reitzes suggests making it a habit to read stories from news outlets directly. “That will help you avoid over-identifying with other people’s anxiety, as it provides a more direct pathway to the news itself,” she explained.

If news outlets still are making you anxious — understandable, considering the disturbing news constantly filling our feeds — Reitzes suggests making your emotions a priority. “[D]o your best to be aware of uncomfortable feelings as they arise, rather than avoiding or denying them,” she said. “And make sure to do so without judgement.”

Don’t use methods of brushing your anxiety off, Reitzes pressed, such as ‘It will pass with time.’” “The reality is that quite the contrary will happen,” she explained.

While that sounds anxiety-inducing in itself, Reitzes explained that the point is that pushing down your feelings will not help, but addressing them will. “If your behaviors are changing in the face of anxiety, you need to talk about what you’re feeling and seek support from others,” she said. “If your anxiety persists, you may want to seek counseling from a professional.”

Monitor yourself for physical symptoms.

Don’t just make your emotions a priority — watch how your body responds to traumatic news. “Look out for symptoms like having trouble sleeping, irregular heartbeat, or excessive sweating,” Reitzes said. “These are symptoms of more acute anxiety. Try to notice other manifestations of anxiety, like avoiding crowded places or isolating yourself more than you normally would.”

Surround yourself with loved ones.

Everyone is feeling shaky during these turbulent times, and spending time with friends and family would be beneficial not just to you, but to your loved ones. “Even when we aren’t able to identify our own discomfort as ‘anxiety,’ we’re still in a state of greater vulnerability and need support from others,” Reitzes explained. “Whether or not you’re talking about anxiety, the presence of others will help create a feeling of safety and security.”

If you’re feeling particularly disturbed after reading the news, try going on a light walk to concentrate on your physical state instead of your emotional state. “The same goes for seeing someone else in a state of anxiety — encouraging them to take a walk or do some light exercise — anything to get out of the state of emotional paralysis that anxiety can create,” she explained.