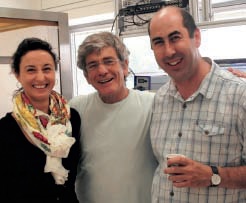 Transforming our understanding of brain activity

The brain is constantly abuzz with electrical signals transferring information between brain cells. The results of this intense electrical activity are the perceptions, thoughts, ideas, decisions, emotions, and movements that constitute human life. Deciphering the code that these cells use is one of the dominant challenges facing neuroscientists. Cracking the brain’s code—and discovering how neurons compute and transmit information–is the focus of the Neural Code Laboratory at ELSC.

The Neural Code Laboratory is being directed by Dr. Michael (Mickey) London, who joined ELSC as a Senior Lecturer. The remarkable young Hebrew University alumnus earned his B.S. and Ph.D. at the university, completing his doctorate under the supervision of Professor Idan Segev at the Interdisciplinary Center for Neural Computation, which has become a vital part of ELSC. Dr. London conducted his post-doctoral work at University College, London (2002-2010), first as a Human Frontiers post doctoral fellow, and subsequently as an MRC senior research fellow and a Wellcome Trust research fellow. Working in the laboratory of Professor Michael Hausser, Dr. London refined his multi-disciplinary approach, focusing on the neural code and single neuron computation.

Professor Eilon Vaadia, director of the ELSC stated: “Cracking the brain’s code—discovering how neurons compute and transmit information—is one of the most exciting areas of scientific research today. We were very pleased when Michael London, who has already established a reputation for himself in this area, joined ELSC.”

Combining expertise in theory with cutting-edge practical skills, Dr. London has developed methodologies helpful to investigating how single neurons process information and communicate. His research, published in Nature (July 2010), is transforming scientific understanding of the impact of the activity of individual neurons on the larger neuron population. Dr. London has demonstrated that even the addition of a single electrical spike to one neuron can produce a significant effect on brain activity. This original and unexpected finding has led scientists to reexamine long-held assumptions about how information is coded and translated into behavior.

Dr. London plans to study the effects of modifying signals while observing their behavior. This type of research was unimaginable before recent technological advances in optogenetics and two-photon imaging. A $ 400,000 two-photon microscope at Hebrew University is advancing these efforts: this microscope enables scientists to examine a live specimen and image living tissue up to a very high depth of about one millimeter. Thus scientists can image brain activity as it taking place—and without hurting laboratory animals. Dr. London’s goal is to image activity in a local neural network, identify and record the activity of an individual neuron that is participating in a specific computation, and manipulate activity in that single neuron, assessing its impact on coding and behavior.

During 2011, Dr. London, along with his wife Niva, decided the time was right to move from London to Israel with their three children: Roni, Gilad, and Noga. A sought-after scientist, he considered offers from several universities and chose Hebrew University and ELSC as “the natural place for me.” As a Hebrew University alumnus, he appreciated the excellence of Hebrew University neuroscience. “I’ve always felt like I’ve shared a common language with the scientists here,” says Dr. London. “Hebrew University has always given me a feeling of inspiration.”

Dr. London’s laboratory will continue to study how neurons communicate, transfer information and compute. “The results of breaking the genetic code have revolutionized the fields of biology and medicine,” said Dr. London, “and we’re only just starting to explore these consequences. We still have a way to go, of course, but I’m excited to be part of this.”

Dr. London’s work is partially funded by a generous gift from AFHU board member Brindell Gottleib of Los Angeles. For further information about how you can help to support pioneering brain science research at ELSC, please contact AFHU’s national office or an office in your region