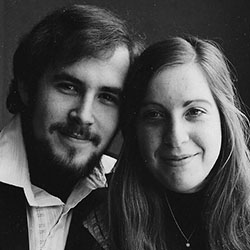 I am the middle of three brothers. All three of us attended Brandeis University. In 1967-1968, my older brother, Rabbi Kenneth Greene, participated in the American Friends of the Hebrew University Junior Year in Israel program. Also participating that year, was a young woman from Binghamton, New York, Karen Staiman. They met while attending Hebrew University (HU), fell in love, and were married in 1969.

Five years later, I was accepted into the same program. My parents accompanied me to John F. Kennedy International Airport to send me off with the chartered flight. The El Al waiting lounge was very crowded. Somehow the subject of how my brother had met his wife on this very same trip arose. I turned to my mother and said, “Who knows, Mom? Maybe I’ll find my wife in Israel too!” Little did I know the power of those words.

I was traveling with a group of good friends that I knew from Brandeis and USY (United Synagogue Youth). Once the seat belt sign was off, we quickly organized ourselves to enjoy the trip together. Just a few rows behind was another group also going to study at HU in the same program. One or two of the guys from the Brandeis group wandered around and met them and told us about them, saying there were some nice girls in that group. Being the suave and debonair young men that we were, we headed over and got acquainted with them. We spent most of the flight together, filling in details of our lives, ambitions, backgrounds, and such. One member of that group was Ruth Schreiber, a daughter of Holocaust survivors. Upon reaching Jerusalem and the campus, we were deposited in Shikunei Aleph. The two groups were able to settle in adjoining buildings.

Our groups spent a good deal of time together, attending the various meetings and other activities. Of the girls in Ruth’s group, I was fairly enamored with her. Besides how pretty she was (and still is), we had similar backgrounds, practices, and levels of observance.

One Friday before Shabbat, we were notified that the school would provide a ride to downtown Jerusalem where there were several clubs. The two groups talked it over and decided to go together. We wound up at a club called Saramello Caves.

I was not the best dancer in the group, but could handle slower songs. Each time a slow song was played, I would only ask Ruthie to dance.

Now, here’s where she and I disagree. I am certain as the sun will rise tomorrow, that during one of these slow dances, she kissed me (and I was hooked). However, she denies this vigorously! She claims I kissed her first. You know what? It doesn’t matter. We quickly became a couple, fell in love and I’ve been blessed to have her be my wife nearly 42 years and the mother to our two beautiful daughters.