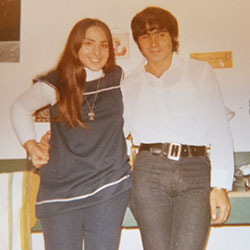 Moshe and I first met each other in a bomb shelter on Mount Scopus in September 1971. Fortunately, there were no bombs falling, but the university had designated most of the bomb shelters in the brand new Resnick dormitories to serve an additional purpose. One was a laundromat and one was a synagogue. Another was a storage area for overseas students to stash trunks and suitcases, and there was a television room. Our “bomb shelter” was a student discotheque.

We danced and we chatted a bit above the noise. When I left to go back to my room, Moshe walked out as well. He surreptitiously slipped his watch into his pocket, asked me what time it was, and then we talked more. We ran into each other again at a kumsitz in the Sukkah on Mount Scopus and then again in November in town—and we have been together ever since.

Moshe’s amazing family adopted me from the start, and that cemented our connection. We married in 1974 at the Israel Goldstein Synagogue on the Givat Ram campus of the university. We are a mixed marriage. I grew up in a Conservative Jewish home in Hollywood, Florida (though born in Hartford, Connecticut), the daughter of first generation Americans whose parents were immigrants from Eastern Europe. I moved to Israel in 1971.  Moshe was born in Morocco to a large religious family, and the year I was born, they immigrated to Israel, first living in a tent in Shaar Ha-aliyah near Haifa and then moving to Moshav Brosh in the northern Negev.

When Moshe was seven, his father died, leaving a young widow with nine children. Most of the older children went off to boarding schools and kibbutz programs thru Youth Aliyah, but the younger ones stayed at home and went to local schools. In the 7th grade, his oldest brother saw Moshe’s potential and enrolled him in the Ayanot Agricultural High School near Nes Ziona. He graduated high school, and then, toward the end of his compulsory military service in the Armored Corps, Moshe was referred to a recruiter from the Hebrew University looking for good candidates for the pre-academic program. He was a driven student in the program and was later accepted to the Faculty of Agriculture. After completing his degree there with a specialty in animal husbandry, he switched to humans and enrolled in the Master of Medical Sciences program with the Hebrew University Hadassah Medical School.

After completing the mechina for overseas students, I studied at the Paul Baerwald School of Social Work, doing my practical work in Kiryat Menachem/Ir Ganim and then in Neve Yaakov, working with new immigrants and families in need. During school, I also worked part-time at the Rothberg School for Overseas Students (now called the Rothberg International School) and then with City University of New York students enrolled in the One Year Program.

One day while at work in the School for Overseas Students (and just before I graduated from the School of Social Work), I was nabbed by an administrator who was looking for an American student to speak at the Board of Governors meeting. All the students enrolled at the school were on break, so he asked me to fill in. I had been asked to speak about the various overseas programs, but I also told the board about my work as a social work student and then told Moshe’s story. Truly, the Hebrew University had opened the doors of educational opportunity to him. The leadership of the university was so moved by the story I told that they asked us to represent the university students on a fundraising tour in California. It was a couple of years after the Yom Kippur War, and there was a moratorium on building. Fundraising was focused solely on the need for student scholarships. Before we left for California, I was also hired to do contract work for the development department. I wrote the stories in English about the students who had received scholarships, and these stories were then sent with the thank you letters to the donors abroad.

Moshe and I started a family in 1977. Our first son, Shai David, was born at Hadassah Ein Kerem. Eventually we moved to the U.S., where two more sons – Yoni and Daniel – were born. All three of the boys spent a summer on Mount Scopus where their parents met; two of them took summer courses and even lived in the Resnick dorms, and the third volunteered in the Emergency Room at Hadassah-Mount Scopus. We inculcated our love for learning in our children: Shai has a Ph.D. in Cognitive Neuroscience; Yoni is an E.R. physician; and Daniel has an MBA and works for a global company that has interests in Israel.

Moshe and I both continued our educational pursuits in the U.S. as well. He became an electrical engineer. After working for many years for three different Israeli companies, today Moshe works with a U.S. based company specializing in radiation therapy. I obtained a master’s degree in Human Service Administration and had a fulfilling career in Jewish communal service, primarily in Jewish federations and at Hadassah. Our love story is one of love for family, love for Israel, and a love for learning.