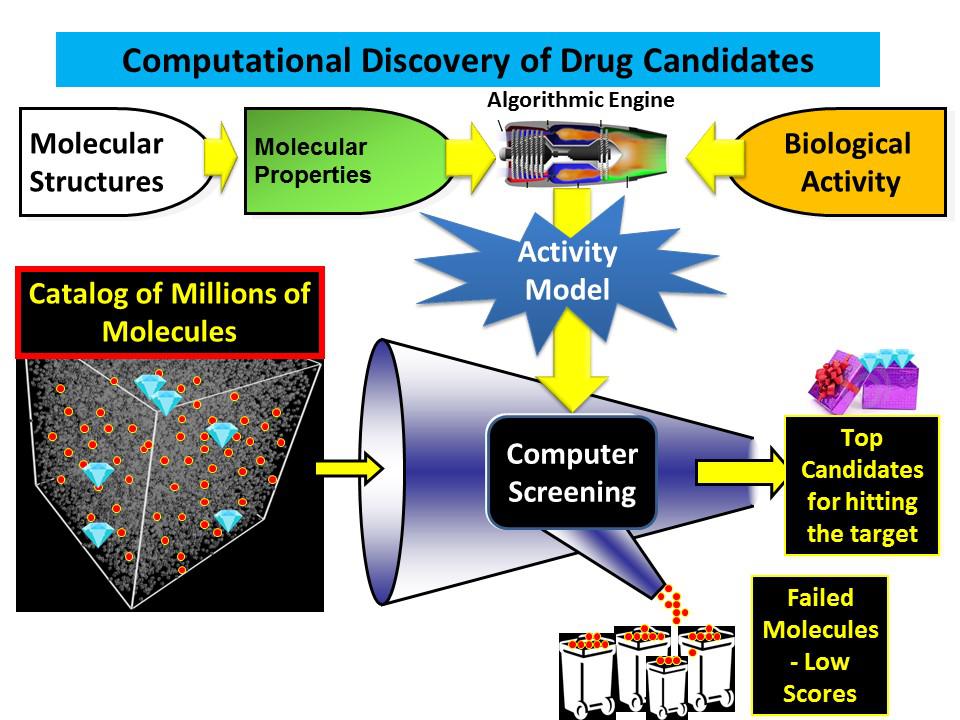 Over the past five years, an Iterative Stochastic Elimination (ISE) algorithm developed in the laboratory of Professor Amiram Goldblum, at the Hebrew University of Jerusalem’s Institute for Drug Research, has been applied to the discovery of potential drugs. The Institute is part of the School of Pharmacy in the Faculty Of Medicine. First tested to solve problems in the structure and function of proteins, the algorithm has since been used to reduce drug discovery times — from years to months and even to weeks.

Goldblum’s solution is different from other algorithms called “heuristics,” which are based on deriving solutions using logic and intuition, and suggests better solutions. In this instance, the algorithm produces a model for the activity of small molecules on one or more proteins known to cause the disease. A model is a set of filters of physico-chemical properties that distinguish between active and non-active molecules, or between more and less active ones. Millions of molecules can then be screened by the model, which enables the scoring of each molecule by a number that reflects its ability to pass through the filters based on its own physico-chemical properties.

A model of this type is usually built in a few hours and is capable of screening millions of molecules in less than a day. Therefore, within a few days or more, it is possible to make initial predictions about the candidate molecules for a specific activity to combat a disease. Most of those candidates have never been known before to have any biological activity.

For the development of this algorithm, Professor Goldblum won an American Chemical Society Prize in 2000. Since then, the algorithm has solved many problems related to understanding various biological systems such as protein flexibility, proteins-small molecules interactions, and more. These and other discoveries stem from collaborations between Goldblum’s laboratory, where his students employ the algorithm to solve various problems and laboratories and pharmaceutical companies in the world that test Goldblum’s predictions in Germany, Japan, the United States, and Israel.

On the strength of Goldblum’s technology, the company Pepticom was founded in 2011 by Yissum, the Technology Transfer arm of the Hebrew University, to revolutionize the discovery of novel peptide drug candidates. Pepticom’s key asset is an exceptional artificial intelligence platform aimed at designing peptide ligands based upon solved crystal structures of proteins.

The algorithm can be applied to other types of problems, in which the number of possibilities is immense and are not solvable even if the world’s most powerful computers would work on it together. These include problems in which the number of possible outcomes are 10 to the power of 100 (10100) and more, such as problems of land transport, aviation, communications and biological systems.

In the field of transportation, this could involve finding alternative ways to get from one point to another using traffic data on each of the alternative roads leading between the two points. In aviation, an optimal arrangement of landings and takeoffs at busy airports. In telecommunications, finding the least expensive routes within a complex array of communication cables. And in biology, a model that is constructed on the basis of a few dozen or hundreds of molecules serves to screen millions of molecules and to discover new drug candidates. These are then sent to experimental labs to be developed further, and in some cases have been crucial in furthering the development of treatment for Alzheimer’s disease and different forms of cancer.

In recognition of his work, Professor Amiram Goldblum was awarded the Kaye Innovation Award for 2017.

The Kaye Innovation Awards at the Hebrew University of Jerusalem have been awarded annually since 1994. Isaac Kaye of England, a prominent industrialist in the pharmaceutical industry, established the awards to encourage faculty, staff, and students of the Hebrew University to develop innovative methods and inventions with good commercial potential, which will benefit the university and society. For more information about the 2017 Kaye Innovations Awards, visit http://bit.ly/kaye2017.