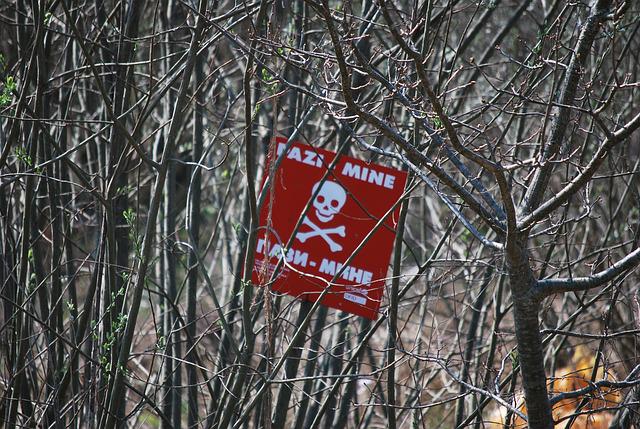 In a time when there is much talk of a “Mother of All Bombs” and the possibility of a conflict involving nuclear weapons, a landmine can seem an artifact of conflicts past, a weapon that has little to do with mass destruction.

And yet, the prosaic device continues to induce its own form of terror around the world, sometimes long after wars have ended. In 2015, the number of people killed or maimed by land mines and other explosive remnants of war rose to 6,461, an increase of 75 percent, according to the 2016 Landmine Monitor. The big jump was largely related to conflicts in Afghanistan, Syria, Libya, Ukraine and Yemen.

Almost 80 percent of the victims were civilians, and nearly 40 percent were children.

Since an international Mine Ban Treaty went into effect in 1999,  tens of millions of anti-personnel mines have been destroyed. But almost 110 million remain buried in fields and forests, reports the Landmine Monitor, which also estimates the expense of removing a mine—one that might have cost as little as $3 to make—could be as high as $1,000.

As costly and methodical a process as it is to extract mines, it’s even more challenging to find them. Reliable technology has been slow to evolve beyond the conventional metal detector, and in some places, giant rats are still the detection method of choice.

Engineers at the German Ruhr-Universität Bochum and Technical University Ilmenau are making progress in developing a ground-penetrating radar technology, with the goal of one day implementing it through a handheld device. Building a prototype could take several years, however.

In Israel, scientists at the Hebrew University of Jerusalem have taken a very different approach—they’re relying on genetically-engineered bacteria to do the job. In a study recently published in Nature Biotechnology, the team of researchers reported that they were able to create microbes that produce fluorescent molecules when they come into contact with vapors that leak from the explosive component in mines.

Along with nutrients and water, the engineered E. coli bacteria were encased in polymer beads only three millimeters in diameter. The beads were scattered over a test field where explosives were buried. Then 24 hours later, using a laser scanning system, the scientists were able to locate the mines based on where the soil was glowing.

“Once you know where a mine is, it’s not that difficult to neutralize it,” says Aharon Agranat, who oversaw the design and construction of the remote scanning system. “The problem is to know where it is. Things like weather conditions and mudslides can cause mines to move over the years. They’re not always in the same place as where they were first buried.”

In what he describes as “quintessential multidisciplinary research,” Agranat, an applied physicist, worked closely with Shimshon Belkin, a microbiologist who created the bacterial sensors, and Amos Nussinovitch, a biochemist who encapsulated the microbes in the polymer beads. They loaded about 100,000 vapor-detecting cells inside each bead. The laser in Agranat’s detection system was able to locate the explosives while mounted on a cart about 70 feet away.

“The advantage of fluorescence is that we can have the laser detect only that light,” he explains, “and not any light reflected from the ground, or from the moon, or from lights nearby. That light doesn’t respond to our laser beam. So, we can work outdoors. This proved to be very effective.”

Their research at this point, Agranat acknowledges, is at the proof-of-concept stage. They’ve shown that their process can work, but both acknowledge there are challenges they still need to overcome before it could be used widely.

Belkin says they have to make the sensor bacteria even more sensitive and stable, and need to increase the scanning speed to deal with large areas that contain land mines.

“What needs to be done now is to see how effective this is going to be in all those different situations.”

One more challenge is to be able to shrink the size of the scanning equipment so that it can be carried by a light unmanned aircraft or a drone, allowing larger areas to be surveyed.

But they continue to make progress. Now, they say they can detect explosives only three hours after the bacteria-filled beads are spread across a field. They’re also programming the bacteria to have a limited life span to ease any concerns about introducing genetically engineered microbes into the environment.

More research certainly needs to be done, but Agranat is encouraged by the results so far.

“As far as I know, this is the first case of remote sensing of buried land mines,” he says. “Most of the questions relate to things like cost effectiveness. But there is no showstopper we can point to.”

Read the source article at Smithsonian.com