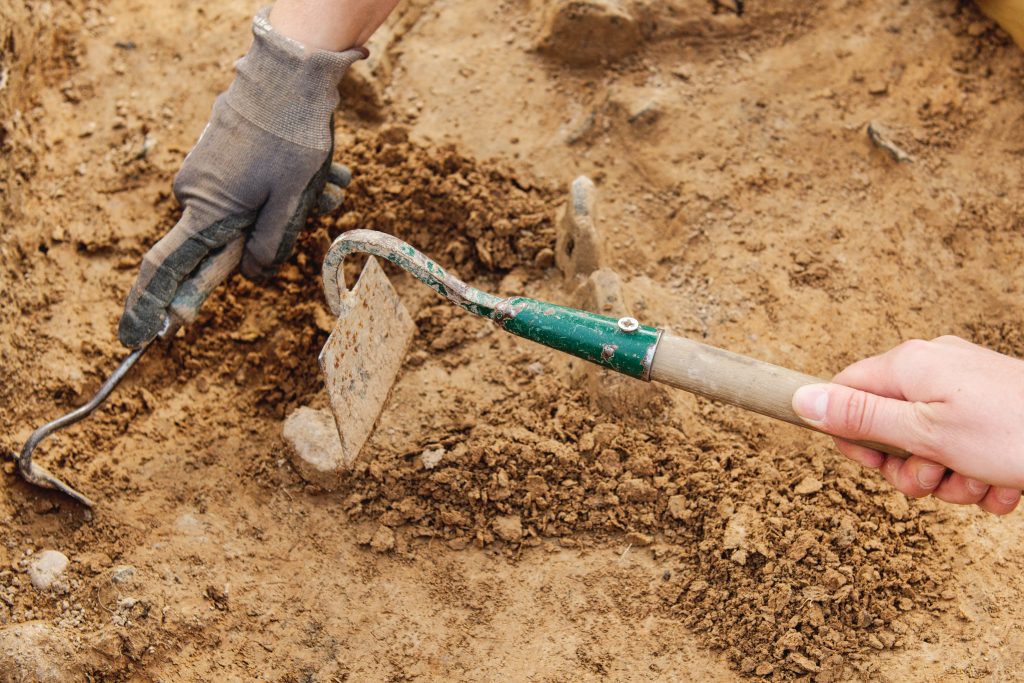 A recent archeological dig in central Israel unearthed evidence that Homo sapiens, humans that inhabit the earth today, likely lived alongside a group of archaic humans known as the Middle Pleistocene Homo.  This discovery, and the international collaborations that made it possible, provide the first evidence that the two human types lived at the same time and interacted with one another.  Their findings were published today in Science.

This discovery came about where a team of archaeologists, led by Dr. Yossi Zaidner at the Hebrew University of Jerusalem (HU), found stone tools alongside human fossils at a site called Nesher Ramla in central Israel.  They shared their find with a team of dating specialists from France (CNRS, Université Bordeaux Montaigne, National Museum of Natural History in Paris, and Université Paris-Saclay) who dated them to 120,000 years ago, when Homo sapiens and Neanderthals were the only known human species roaming about Africa, Europe, and the Near East.

Taking a closer look at the human fossils, a team of researchers led by Tel Aviv University Professor Israel Hershkovitz, was amazed to see that their features closely resembled those of a less developed human species that was thought to have become extinct more than 300,000 years ago.  They published their findings, as well, in a companion paper in Science and named the new human fossil Nesher Ramla Homo, based on its location.  “This discovery is particularly dramatic because it shows us that there were several types of Homo living at the same place and the same time at this later stage of human evolution,” Zaidner shared.

Nesher Ramla, located near the modern city of Ramla, was an active site used by hominins roughly 120,000-140,000 years ago.  As a result, an 8-meter layer developed, thick with the remnants of stone tools, bones of hunted animals, and remains of ancient fireplaces accumulated there.  Studying these remnants gives clues to how Nesher Ramla Homo lived; in this case, a quite sophisticated life.  Nesher Ramla Homo was a skilled hunter of rhino, wild cattle, deer, and horses.  They created stone tools using methods and techniques that had previously only been identified with more advanced hominins, such as Homo sapiens and Neanderthals.

The advanced nature of their stone tools led Zaidner and his team to conclude that the Nesher Ramla Homo and Homo sapiens who lived in Israel 120,000 years ago interacted with one another and shared knowledge between their two groups. “It would stretch the imagination to think that Nesher Ramla Homo or Homo sapiens would have been able to independently invent such an indistinguishable set of ‘technologies,’” Zaidner explained.

“A far more sensible explanation is that through interactions, these two hominins transferred key knowledge. We still don’t know what the extent or length was of any communication or whether it was individuals meeting and interacting or there were larger social groups that came together,” he added.

The findings at Nesher Ramla provide archaeological support for close cultural interactions and genetic admixture between different human lineages before 120,000 years ago.  Though recent genetic studies suggest that links between the two populations of archaic and modern humans occurred as early as 200,000 years ago, until this latest discovery, it hadn’t been what those links looked like or where they occurred.  We now know that these two groups met on the terra firma of modern-day Israel and that the ties between them were close enough to allow for a transfer of knowledge with regards to tool production and technique.  A glimmer of hope in the Middle East not always known for getting along.