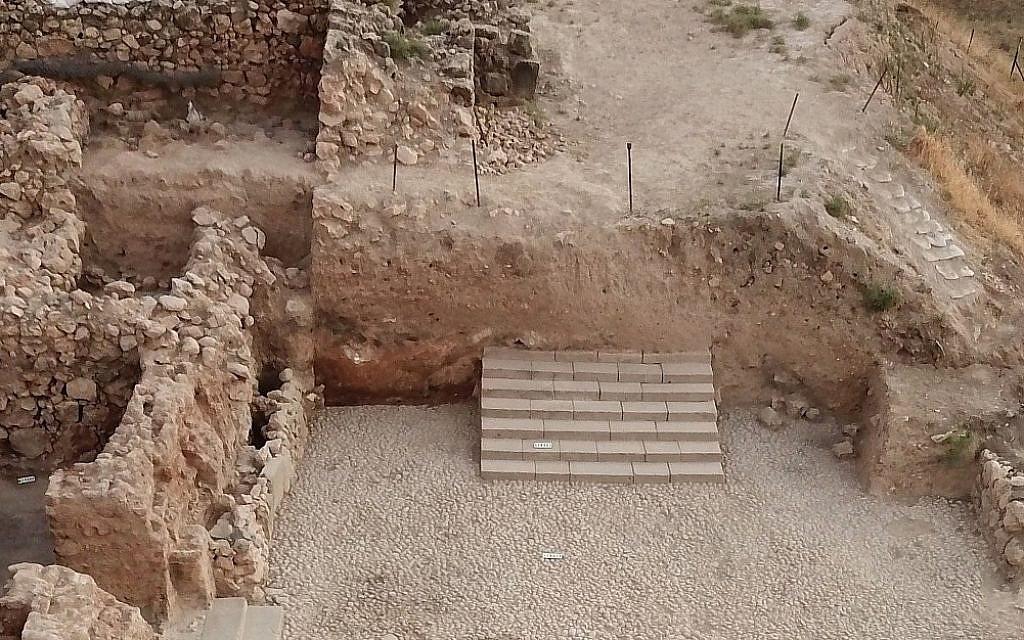 Seven stunning large basalt stairs recently excavated at Tel Hazor give new indication of the ancient grandeur of the Canaanite kingdom 3,500 years ago, that according to biblical tradition was conquered by the Israelites and razed to the ground.

As depicted in Joshua 11:10, Hazor was the “head” of the Canaanite settlements taken by the Israelite leader. While there are still more stairs to be uncovered, it is thought that they lead into the large palace complex from where the King of Hazor ruled on the northern slopes of the upper city facing the lower city.

“This is exactly the palace that, if you were to go by the biblical narrative, would have been conquered by the Israelites,” said Tel Hazor co-director Dr. Shlomit Bechar. Tel Hazor National Park is a UNESCO World Heritage Site and can be visited by the public.

The newly unearthed 4.5-meter wide monumental staircase is unprecedented in its craftsmanship in this era and region, according to Bechar. Each stair is shaped to fit snugly into place in a manner that is not found anywhere else, said Bechar in conversation with The Times of Israel.

Hazor has served as a training ground for Israeli archaeologists — past, present and future. In 1955–1958 and 1968-70, celebrity archaeologist Yigael Yadin led excavations at the site assisted by another stalwart researcher, Yohanan Aharoni. Now its 30th consecutive dig season, the current Selz Foundation Hazor Excavations in Memory of Yigael Yadin was founded by Hebrew University Prof. Amnon Ben-Tor in 1990 and under the auspices of the Israel Exploration Society.

Located north of the Sea of Galilee on a trade route connecting Egypt and Babylon, Hazor was the largest biblical-era site in Israel. With an estimated population of 20,000, its size and strategic location made it an important city in antiquity. After its fiery destruction, it was rebuilt by the Israelites, perhaps by King Solomon. Several hundred years later, the Israelite settlement was destroyed by the Assyrians under Tiglath-Pileser III in 732 BCE.

According to a Hebrew University press release, the remains of the last Israeli settlement of Hazor were also uncovered this year, including a considerable quantity of shattered pottery vessels — evidence of its destruction.

The stairs and two other much smaller basalt steps nearby were first uncovered in 2018. They have undergone conservation and are now available for viewing by the public. Bechar said she intends to continue the staircase’s excavation within the next three or four years.

In speaking with The Times of Israel, Bechar said that while these stairs, strangely modern in appearance, are grand in their own right, it is quite possible that they are not “the” staircase into the palace, rather that they could lead to another courtyard, which could then lead to another large staircase.

Read the entire article at The Times of Israel