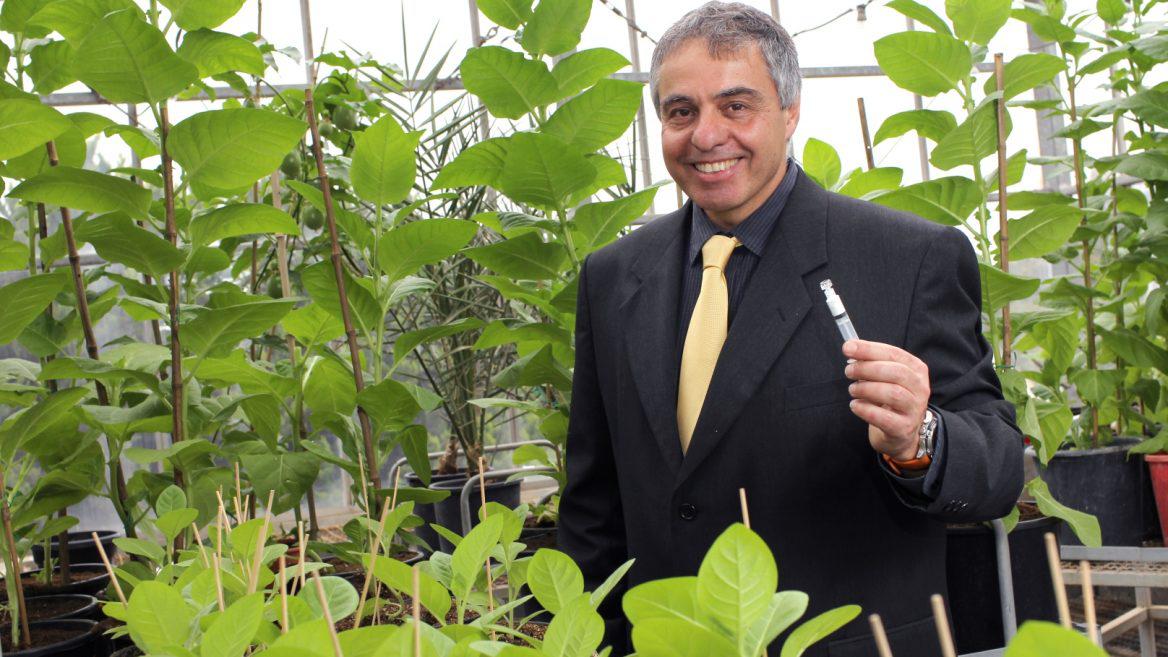 Oded Shoseyov’s lackluster grades failed to get him into the undergraduate chemistry program at the Hebrew University of Jerusalem. So he audaciously persuaded a committee of professors to take a chance on him.

It was a good gamble: He would later become a professor of protein engineering and nano-biotechnology at the same university, and one of its most prolific inventors and serial entrepreneurs.

Shoseyov, now about to found the 12th company spun out of his research, has a knack for turning crazy concepts into commercially viable products such as printed meals, human collagen, transgenic eucalyptus trees for the paper industry, and a pooper-scooper that turns dog droppings into odorless powdered fertilizer.

“I wasn’t a particularly good student but I was always curious about science. As a kid, I had a chemistry and electronics lab and I built things with my brother,” Shoseyov tells ISRAEL21c from his lab at the Robert H. Smith Institute of Plant Science and Genetics at Hebrew University’s Rehovot campus for agriculture, food and environment.

He is the eighth generation of his family in Rehovot, a city of 150,000 about 20 kilometers south of Tel Aviv. A major academic and biotech hub, Rehovot also has a rich farming tradition.

“My great-grandfather was one of the founders of Rehovot. What is now the main street, Rehov Herzl, was his vineyard,” Shoseyov relates. “We still own a vineyard of about 50 acres. Situated in the middle is a boutique winery, Bravdo, established about 19 years ago.”

The name of the winery pays homage to its founding partner, Hebrew University Prof. Ben Ami Bravdo, a leading scientist of modern viticulture under whom Shoseyov studied for his PhD on the biochemistry of wine and grape flavor.

After a post-doc at the University of California at Davis in 1987 to 1990, Shoseyov accepted a position with Hebrew University’s Faculty of Agriculture and founded its first protein-engineering lab.

For the past 15 years, Shoseyov has focused on nano-biotech, especially nanocellulose.

This lightweight transparent nano-fiber is stronger than steel and has infinite potential as the basis for super-durable fabrics, shoes, touchscreens, packaging, paints, buildings, medical implants and much more. It’s derived from plant cellulose, a polysaccharide (sugar) that is the most abundant polymer on earth.

“Cellulose is everywhere,” says Shoseyov, whose first breakthrough back in 1993 was developing and cloning a protein that binds to cellulose in order to create composite materials.

At that point he was naively ready to publish a paper before patenting his invention. Luckily, he mentioned this during a casual lunch with George Aaron, cofounder of an Israeli-American pharmaceutical company for which Shoseyov had done some consulting.

Alarmed, Aaron put down his fork and phoned Yissum, Hebrew University’s tech-transfer company. He hastily arranged to get Shoseyov’s protein patented before the paper was published, gave the budding scientist $150,000 to do a proof of concept, promised him 4% equity in a commercial venture based on his invention, and asked Yissum to negotiate any licensing agreements.

“We didn’t even write the agreement on a napkin but they fulfilled it,” says Shoseyov.

CBD Technologies, the protein-engineering company founded in December 1993 as a result of that café conversation, merged with FuturaGene 13 years later and was sold for $100 million to Brazilian paper company Suzano in 2010. The R&D center remained in Rehovot Science Park.

Shoseyov’s technology accelerates the growth rate of transgenic eucalyptus trees used for making paper. (Transgenic plants are enhanced with DNA from other organisms.)

“It was the first commercial transgenic tree ever approved,” says Shoseyov.

“I realized it was one thing to do research and publish a paper but we can find ways to use the data for economic benefit. So I’ve done that now more than 10 times,” he tells ISRAEL21c.

Human collagen from tobacco, food from a printer

Another offshoot of his university laboratory is regenerative medicine company CollPlant.

“We have now developed a bio-ink based on our collagen that is suitable for use in 3D printing, ”Shoseyov reports, and he has collaborations in place to develop 3D-printed human corneas, kidneys and lungs.

“It’s really a revolution,” says Shoseyov. “For the first time we can print the food and cook it at the same time.”

The Chef-it computerized platform enables 4D printing and cooking of personalized meals using ingredient cartridges including one containing calorie-free nanocellulose fiber as a self-assembling binder in place of starch, eggs, gluten or gelatin.

A wide variety of dishes can be baked, fried or grilled, and tailored according to taste preferences and dietary restrictions. Printed and cooked layer by layer, they can take virtually any form.

“You could make a plant-based burger with fries in the middle,” says Shoseyov. “I’m talking about things that are not possible with regular cooking methods.”

In about 18 months he hopes to have beta sites up and running in Israeli workplaces. Hospitals and restaurants may follow.

In the future, he envisions individual Chef-it users programming the machine to prepare food in time for the kids to come home from school. “You could use a smartphone app to send a print command to each of your children to order exactly what they want and need for their personal diet and taste,” he explains.

There’s no question those chemistry professors at Hebrew University are happy they accepted Oded Shoseyov in 1978. His first year of university, after his service in the artillery corps, Shoseyov made the dean’s list.

He has won several awards, authored or co-authored more than 180 scientific publications, invented or co-invented 50 patents, and was recently chosen by the Founders Studio for its “70 by 70” feature saluting outstanding Israelis.

In addition to overseeing the 20 graduate students in his lab, teaching classes and maintaining an active role in his businesses, Shoseyov enjoys running, mountain biking and singing in a quartet.

“My inspiration is Leonardo da Vinci, the most interdisciplinary scientist ever — a chemist and medical doctor, engineer and artist,” says Shoseyov, the father of a daughter and two sons from his first marriage and stepfather of two daughters with his present wife, Yaeli Pintchuk, a psychologist specializing in eating disorders.

He also serves on the boards of PlantArcBio and UBQ Materials.

Most of his firms’ offices are in Rehovot Science Park. At the two companies headquartered in the North, he delegates more of the responsibilities.

“I’m always ready to give my ideas up to other people because I have probably more than I can take care of myself. I believe if you really want to take something to the next step it’s important to collaborate with people from different disciplines,” Shoseyov says. “I’m lucky to work with very good people so it’s not all on my shoulders.”