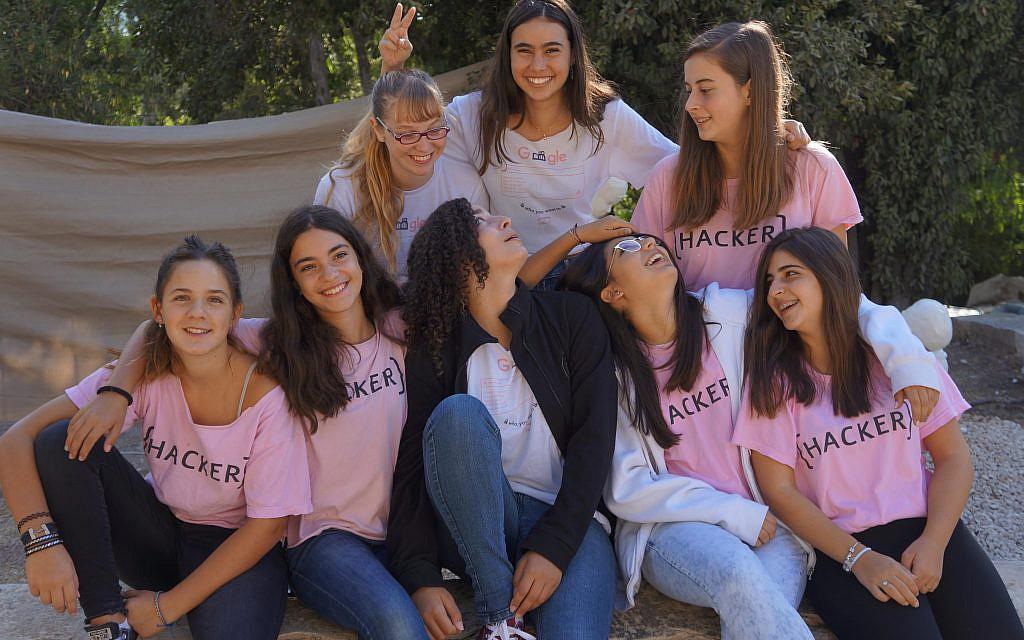 As Israel faces a shortage of some 10,000 engineers and programmers in the coming decade, three Jerusalem-area students in the tech field noticed an even bigger scarcity in their classrooms and workplaces: women. “We’re frustrated that not enough girls are involved in the computer science field,” said Noga Mann, a Hebrew University student and a co-founder of QueenB. Yasmin Dunsky and Neta Moses, and later, Mann, wanted to address the gender disparity as early as possible. They created QueenB, a mentorship and training program for girls of middle-school age, to support their interest in computer science and instill confidence in their abilities. Israel has some 5,600 active innovation companies and startups, which raised a record $4.8 billion in funding last year. But the number of women in this growing and lucrative field is relatively meager. According to Innovation Authority 2016 data, females account for 26% of the some 140,000 people who work in research and development in Israel, or some 36,000 women. Mann traces part of this problem to the messages girls receive when they are first thinking about what they want to do when they grow up. “They think that computer science is not for them; they think it’s only for geniuses or it’s very boring,” said Mann. QueenB is now in its second year, offering basic classes in computers and programming once a week in a computer lab at Hebrew University. Currently, there are about 30 volunteer instructors helping 120 girls, teaching them a relatively high level of computer programming and utilizing high school and college-level materials, said Mann. Maayan Mirchan, 28, studies at Hebrew University and is in her second year of volunteering with QueenB. She found out about the organization through a friend who works at Google, who’s also a friend of Dunsky’s. “I’m the only girl studying electrical engineering in my year,” said Mirchan. “It’s a bummer that there aren’t more girls in the field. I think a lot of it has to do with self-confidence.… It doesn’t have to be a guys’ subject.” Mirchan teaches Java programming, as well as sessions on gender stereotyping and famous women involved in computer engineering. And the girls are quick learners. “They can work by themselves after three months, and none of them knew how to program before,” said Mirchan. QueenB girls also participate in hackathons, coding competitions, and tours of tech companies, some of which help to sponsor the organization. They learn about being a tech entrepreneur and how to “pitch” or present their products to an audience. The girls also start working on their own personal app during the year. Past projects have included an exercise app, in which clicking on a photo of muscles on the body would show exercises that could relieve pain in that muscle, and an app that identifies nail polish brands. “It was really important for us to be really interesting and creative,” said Mann. “We try to make it close to the things they’re interested in.” Tuv Feller, 14, created a “friendship” app last year that tests how well friends know each other through questions. After getting involved in QueenB, she said, she would now like to study something in the computer science field. Feller said the instructors are like “big sisters.” “The leaders are very nice, they explain everything really well. And I think it’s a good program because it’s very good for girls. There are lots of girls from all the sciences and computer science,” said Feller. And QueenB will be able to do more teaching with $72,000 it recently won at the WeWork Creator Awards, which took place in Tel Aviv on October 26. The co-working space WeWork held a competition for nonprofit and for-profit startups in Israel and around the world, awarding a total of $20 million. Mann said with the prize money they will be able to expand out of Jerusalem into other cities in Israel, such as Tel Aviv, Herzliya, Haifa and Beersheba. “The dream is having branches all over Israel,” she said. She Codes, another female tech initiative in Israel, also won big at the WeWork Creator Awards, with a large grant of $180,000. She Codes is a community of 7,000 female computer programmers that offers mentoring and courses to women who are already working in the tech field. QueenB focuses on younger girls, with the aim of giving them the confidence to enter a field dominated by men. Mann and the other co-founders hope those girls will in turn become mentors for younger girls. And even if some don’t go onto work in STEM fields — science, technology, engineering, and mathematics — Mann said they hope to give the girls motivation and belief in their own abilities. “We teach them to be brave and take on challenges, even if later on in life they won’t be programmers,” she said. Mirchan hopes that QueenB can lead to more women in the tech world. “Long term, it would be really cool if we got a community of high-tech women, even 5 or 10 years in the future,” said Mirchan. “A whole networking system would be really cool to pass around job openings and that could benefit a lot of women.”