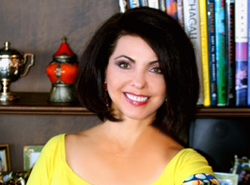 Talia Carner was the publisher of Savvy Woman magazine. A former adjunct professor at Long Island University School of Management and a marketing consultant to Fortune 500 companies, she was also a volunteer counselor and lecturer for the Small Business Administration and a member of United States Information Agency (USIA) missions to Russia. She participated at the 1995 International Women’s Conference in Beijing, where she sat on economic panels and helped develop political campaigns for Indian and African women. Ms. Carner’s first novel, Puppet Child, was listed in “The Top 10 Favorite First Novels 2002” and launched a nationwide legislation (The Protective Parent Reform Act). China Doll made Amazon’s bestsellers list and served as the platform for Ms. Carner’s presentation at the U.N. in 2007 about infanticide in China—the first ever in U.N. history. Her novel, Jerusalem Maiden, won the Forward National Literature Award in the “historical fiction” category. In June 2015, HarperCollins released Carner’s newest novel, Hotel Moscow, which tells the story of the daughter of Holocaust survivors who travels to Russia shortly after the fall of communism.

On the Basis for Her New Book, Hotel Moscow

In 1993 I was running my marketing consulting firm for Fortune 500 companies. I also volunteered for the Small Business Administration, specifically for women’s programs in New York.  The USIA asked me to go to Russia to teach women business skills (this was shortly after the fall of communism).  My first trip in May 1993 was an amazing, eye-opening experience; I learned about a highly educated group of women, many were doctors and engineers, who were essentially reduced to being ‘hunters and gathers.’ After the fall of communism, the country had no legal system so female lawyers lost their jobs, not to mention medical and social services.  Speaking to these female professionals and learning their stories left a lasting impression upon me.

Six months later I returned, landing in Russia only a few hours after the uprising against the president, Boris Yeltsin. I asked ‘too many’ questions and the militia came after me, forcing me to seek refuge at the U.S. Embassy. I wrote a 23-page report of this experience, and a friend encouraged me to turn it into a novel, launching my writing career. After intense research, incorporating my story and the stories about the Russian women I met, the book never got published. Despite this, I had already begun work on my next book. My second completed novel was published and started my official ‘successful’ writing career.

On Her Writing Process

I initially tried to write about domestic issues. Instead, my stories are all international and have a large canvas. The topics that I’ve written about it, such as infanticide and women’s rights–I learn about these issues and they grab a hold on me until I write about it. Each of my books took about five years from start to finish.

Sometimes the plot for a story comes to me and I can’t stop thinking about it. For my latest book, Hotel Moscow, I had this idea about a New York liberal Jewish woman who is the daughter of Holocaust survivors. I combined it with my first book based on my experience in Russia.

Writing a novel is crafting something very fine. Specifically for Hotel Moscow, because it deals with the Holocaust, I wanted to offer a new perspective, which is that of a second-generation Holocaust survivor.

There is no story about a person who is beaten by life. People want to read about the interesting story of the human spirit rising above negative issues that control our lives, be it psychological, economical, geographical or political.

On Studying at Hebrew University

I studied sociology and psychology at the Hebrew University. As part of my studies, I learned an enormous amount of statistics, which was immensely helpful in my prior career. Because I understood statistics, I was able to find trends others couldn’t. As an HU student, I also had to be very disciplined to study for hours and hours in order to succeed. This work ethic has continued throughout my life.

I didn’t embrace being a feminist until later in life. Growing up, I was admonished if I asked too many questions. Even when I was in the hospital for the birth of my first child, the doctors ignored my questions. Finally embracing feminism was incredibly liberating. Eventually I felt confident enough and felt compelled to help other women. I even named my marketing consulting company ‘Business Women Marketing Corporation,’ and the profits went to training and educating women.

One of the only ways for women to improve status and grow is through education. We see in underdeveloped countries a huge difference in an older marriage ages, lower numbers of children leading to lower birth mortality rates and other positive changes. More importantly, when women are educated, they tend to work and when they do, a chain of events can happen. A husband can stop physical abuse, a wife’s in-laws stop enslaving them, their sons get a new vision of what women can be like and their daughters have hope for their futures. Furthermore, professional women are more likely to run for leadership positions and will support other women to start their own businesses. Sometimes you educate one woman and you educate a village.

On Her Leadership Roles

For 30 years I’ve been involved with Maccabi USA since my husband, Ron Carner, is the president. I’m amazed at how the Maccabi games bring Jews together from all around the world. For about the last 10 years, I’ve become more interested in helping Jewish women, which is why I’m on the board of Hadassah Brandeis Institute and for the last few years, on the board for the Jewish Women’s Foundation of New York.