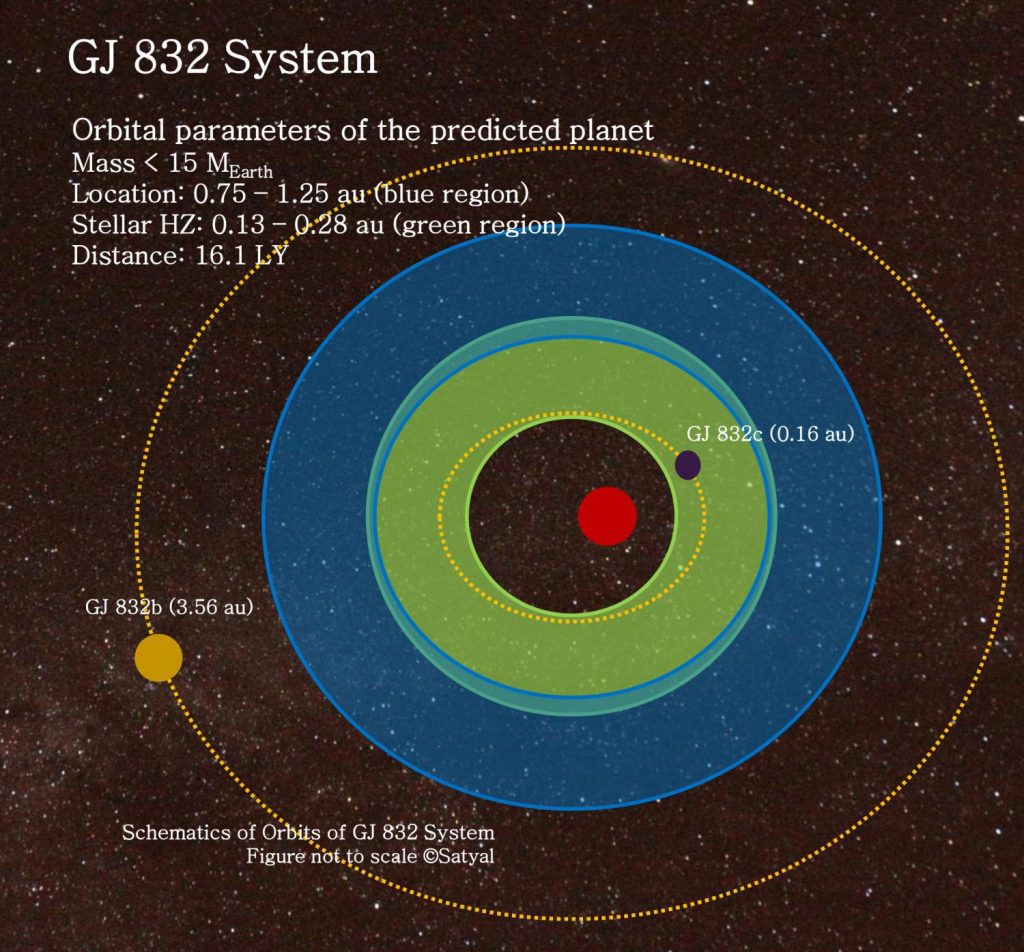 The team investigated the star system Gliese 832 for additional exoplanets residing between the two currently known alien worlds in this system. Their computations revealed that an additional Earth-like planet with a dynamically stable configuration may be residing at a distance ranging from 0.25 to 2.0 astronomical unit (AU) from the star. “According to our calculations, this hypothetical alien world would probably have a mass between 1 to 15 Earth’s masses,” said the lead author Suman Satyal, UTA physics researcher, lecturer and laboratory supervisor. The paper is co-authored by John Griffith, UTA undergraduate student and long-time UTA physics professor Zdzislaw Musielak. The astrophysicists published their findings this week as “Dynamics of a probable Earth-Like Planet in the GJ 832 System” in The Astrophysical Journal. UTA Physics Chair Alexander Weiss congratulated the researchers on their work, which underscores the University’s commitment to data-driven discovery within its Strategic Plan 2020: Bold Solutions | Global Impact. “This is an important breakthrough demonstrating the possible existence of a potential new planet orbiting a star close to our own,” Weiss said. “The fact that Dr. Satyal was able to demonstrate that the planet could maintain a stable orbit in the habitable zone of a red dwarf for more than 1 billion years is extremely impressive and demonstrates the world class capabilities of our department’s astrophysics group.” Gliese 832 is a red dwarf and has just under half the mass and radius of our sun. The star is orbited by a giant Jupiter-like exoplanet designated Gliese 832b and by a super-Earth planet Gliese 832c. The gas giant with 0.64 Jupiter masses is orbiting the star at a distance of 3.53 AU, while the other planet is potentially a rocky world, around five times more massive than the Earth, residing very close its host star—about 0.16 AU. For this research, the team analyzed the simulated data with an injected Earth-mass planet on this nearby planetary system hoping to find a stable orbital configuration for the planet that may be located in a vast space between the two known planets. Gliese 832b and Gliese 832c were discovered by the radial velocity technique, which detects variations in the velocity of the central star, due to the changing direction of the gravitational pull from an unseen exoplanet as it orbits the star. By regularly looking at the spectrum of a star – and so, measuring its velocity – one can see if it moves periodically due to the influence of a companion. “We also used the integrated data from the time evolution of orbital parameters to generate the synthetic radial velocity curves of the known and the Earth-like planets in the system,” said Satyal, who earned his Ph.D. in Astrophysics from UTA in 2014. “We obtained several radial velocity curves for varying masses and distances indicating a possible new middle planet,” the astrophysicist noted. For instance, if the new planet is located around 1 AU from the star, it has an upper mass limit of 10 Earth masses and a generated radial velocity signal of 1.4 meters per second. A planet with about the mass of the Earth at the same location would have radial velocity signal of only 0.14 m/s, thus much smaller and hard to detect with the current technology. “The existence of this possible planet is supported by long-term orbital stability of the system, orbital dynamics and the synthetic radial velocity signal analysis”, Satyal said. “At the same time, a significantly large number of radial velocity observations, transit method studies, as well as direct imaging are still needed to confirm the presence of possible new planets in the Gliese 832 system.” In 2014, Noyola, Satyal and Musielak published findings related to radio emissions indicating that an exomoon could be orbiting an exoplanet in The Astrophysical Journal, where they suggested that interactions between Jupiter’s magnetic field and its moon Io may be used to detect exomoons at distant exoplanetary systems. Explore further: Earth-like planet may exist in a nearby star system More information: S. Satyal et al, Dynamics of a Probable Earth-mass Planet in the GJ 832 System, The Astrophysical Journal (2017). DOI: 10.3847/1538-4357/aa80e2