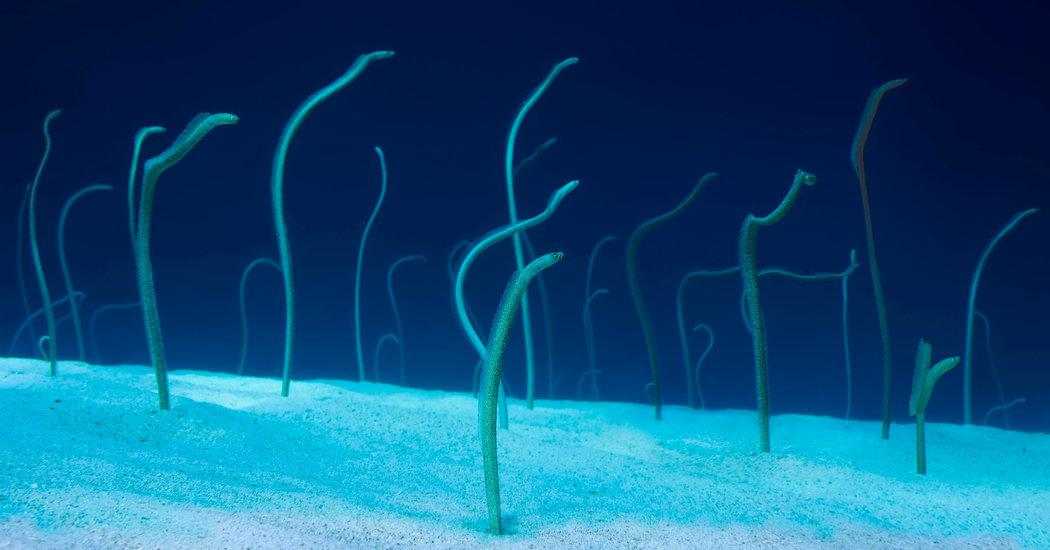 From a distance, garden eels look a bit like some strange grass waving on the sea floor. That’s until they abruptly shrink back into the holes they’ve burrowed in the sand.

The eels seem to be unique among fish. They are capable of swimming free, which they do to change burrows. But mostly, they live sessile lives, anchored in their narrow burrows even when they emerge to feed, like tethered snakes striking at zooplankton too small to see.

In the Red Sea, they live in colonies of hundreds or even thousands, from shallow waters of 13 feet or so, to depths of 180 feet.

When they rise from the sand en masse, their appearance can seem like something from a science fiction movie. But what has recently captured the interest of scientists is what they do once much of their body is waving in the current.

Alexandra Khrizman and colleagues at the Hebrew University of Jerusalem and Tel Aviv University made more than 100 dives and planted cameras among garden eels to determine how they handle currents, and whether being stationary interferes with getting a good meal.

The remote cameras were necessary because, Ms. Khrizman said, “The eels are very shy.”

Free swimming fish that stay at a specific site to feed don’t do well in stronger currents because if they turn sideways the current will push them. So in working to stay in one spot, they use energy and miss out on feeding opportunities.

For garden eels, this was not at all the case. In calm water the eels take any shape that works, striking in any direction at the tiny animals in the water. When the current gets stronger, a little over one mile per hour, the eels face into the current and shape their body into a question mark.

The shape makes the drag four times less than it would be if they didn’t reshape their bodies. And they can still feed effectively, unlike free-swimming fish, because they aren’t fighting the current. They don’t have quite the reach they do in calm water, but on the other hand the faster the current, the more plankton are being swept by in any given amount of time.

The conclusion, as the researchers reported in the Journal of Experimental Biology is that if you’re an eel, sometimes it pays to stay at home.