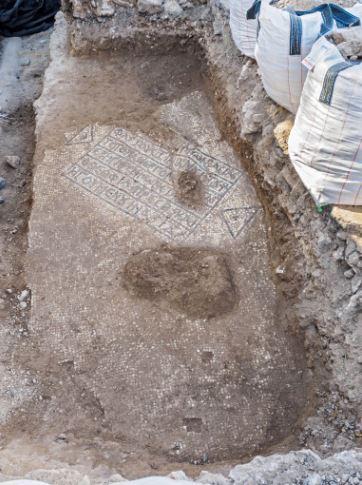 JERUSALEM, ISRAEL—A 1,500-year-old mosaic floor in what may have been a Christian pilgrim hostel has been unearthed in an area heavily damaged by infrastructure groundwork on the road to Jerusalem’s Damascus Gate, according to a report in The Times of Israel. The nearly intact mosaic contains six lines of Greek text, written in black on a white background. Leah Di Segni of Hebrew University translated the text, which reads, “In the time of our most pious emperor Flavius Justinian, also this entire building Constantine the most God-loving priest and abbot, established and raised, in the 14th indiction.” The inscription may commemorate the construction of the building by a priest named Constantine, who was abbot of the Nea Church, founded by Justinian. De Segni also noted that the word “indiction” refers to an ancient method of keeping track of time for taxation purposes. “This new inscription helps us understand Justinian’s building projects in Jerusalem, especially the Nea Church,” Di Segni explained. Archaeologist David Gellman of the Israel Antiquities Authority said the salvage excavation team also found traces of the building’s walls, pieces of pottery, and coins dating to the sixth century A.D. For more, go to “Byzantine Riches.”

Read the source article at Archaeology