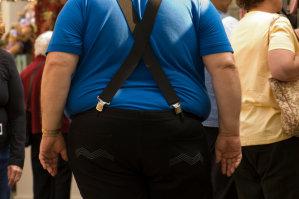 A new study provides insight into the mechanisms behind the development of kidney damage due to obesity, points to a potential target for protecting the kidney health of individuals with obesity.

September 6, 2017 — A new study provides insights into the mechanisms behind the development of kidney damage due to obesity. The findings, which appear in an upcoming issue of the Journal of the American Society of Nephrology (JASN), point to a potential target for protecting the kidney health of individuals with obesity. Obesity-related kidney dysfunction develops early in the course of obesity, justifying the search for unique regulators that could be targeted for therapy. Obesity can cause structural and functional changes in the kidneys, which may help explain why individuals with obesity face an elevated risk of chronic kidney disease and its progression to kidney failure. Although multiple metabolic factors have been proposed to contribute to obesity-induced kidney problems, the underlying mechanisms are not completely understood. To investigate, a team led by Dr. Joseph (Yossi) Tam, DMD, Ph.D. and Ph.D. student Shiran Udi, M.S., at the Hebrew University of Jerusalem’s Institute for Drug Research in Israel, examined the kidney cells that are responsible for the reabsorption of nutrients, while allowing other substances of no nutritional value to be excreted in the urine. These kidney cells, called renal proximal tubular cells or RPTCs, are especially sensitive to the accumulation of fat, or lipids — an effect called lipotoxicity. The researchers examined the potential role of endocannabinoids, lipid molecules that interact with the cannabinoid-1 receptor (CB R) and are abundantly expressed in the brain and periphery, including the kidney. Endocannabinoids act on the CB R receptor in RPTC renal cell lipotoxicity. Models that lacked expression of the receptor in the RPTC renal cells experienced significantly less obesity-induced lipid accumulation in the kidney as well as less kidney dysfunction, injury, inflammation, and scarring. Moreover, the study revealed the molecular signaling pathway involved in mediating the kidney injury and lipotoxicity in RPTC renal cells induced by the CB R cellular receptors. Specifically, these deleterious effects associated with decreased activation of liver kinase B1 and the energy sensor AMP-activated protein kinase, as well as reduced fatty acid β-oxidation. The research shows that manipulating the cannabinoid-1 receptor (CB R) specifically in the RPTC renal cells may provide a novel therapeutic intervention for treating obesity-induced nephropathy. “This work provides a novel approach to slow the development of renal injury through chronic blockade of peripheral CB Rs,” said Dr. Tam. “It also supports strategies aimed at reducing the activity of the endocannabinoid system, specifically in the kidney, to attenuate the development of RPTC dysfunction in obesity.” Study co-authors include Liad Hinden, Ph.D., Brian Earley, M.S., Adi Drori, Ph.D., Noa Reuveni, Rivka Hadar, M.S., Resat Cinar, Ph.D., and Alina Nemirovski, Ph.D. Dr. Tam is Director of the Hebrew University’s Multidisciplinary Center on Cannabinoid Research, and Head of the Obesity and Metabolism Laboratory at the Hebrew University’s Institute for Drug Research in the Faculty of Medicine. FUNDING: The work was supported by a German-Israeli Foundation grant (#I-2345-201.2/2014), and an ERC-2015-StG grant (#676841) to Dr. Joseph Tam. CITATION: Shiran Udi, Liad Hinden et al. Proximal Tubular Cannabinoid-1 Receptor Regulates Obesity-Induced CKD. Published online before print August 31, 2017. Journal of the American Society of Nephrology (JASN), doi: 10.1681/ASN.2016101085.