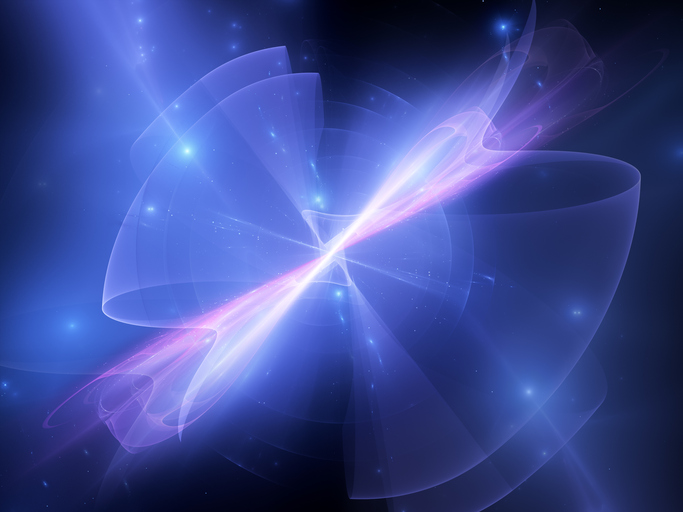 Mechanism for Gamma-ray Bursts from Space is Decoded

Mechanism for Gamma-ray Bursts from Space is Decoded

Gamma-ray bursts, short and intense flushes of energetic radiation coming out from outer space, are the brightest explosions in the universe. As gamma-rays are blocked by the atmosphere the bursts were discovered accidentally in the late sixties by the Vela satellites, defense satellites sent to monitor man-made nuclear explosions in space.

Since their discovery, the bursts have been at the focus of attention with several dedicated satellites launched to explore their origin. In the late nineties, it was realized that long bursts (lasting more than a few seconds)  arise during the death and collapse of massive stars while in the first decade of this century it was found that shorter bursts (lasting less than a few seconds) arise in neutron star mergers. This last realization was confirmed dramatically two years ago with simultaneous observations of gravitational waves by the gravitational wave detectors LIGO and Virgo and a short burst by two satellites, NASA’s Fermi and ESA’s intergral.

Still many mysteries involving these bursts remained. Particularly puzzling was the question of how high energy radiation is produced. Last January a gamma-ray detector on board of NASA’s Neil Gehrls Swift satellite detected GRB190114C, a bright burst that took place 4.5 billion years ago in a distant galaxy.  Following a trigger from Swift, The MAGIC telescope, a Cherenkov detector at the Roque de los Muchachos Observatory in La Palma, Spain, slew towards the burst’s location and detected extremely high energy photons (at TeV energies) coming from it. The ultra-high energy TeV photons, that were observed about 50 seconds after the prompt emission, in the so-called “afterglow” phase, were at least 10 times more energetic than the highest energy photons detected previously from any burst.

By now only preliminary data of the MAGIC observations have been posted. Still, Professor Evgeny Derishev from the Institute for Applied Physics in Nizhny Novogorod and Professor Tsvi Piran from the Hebrew University of Jerusalem combined these data with observations of lower energy (X-ray) photons carried out by the Neil Gehrles Swift and have shown that they reveal the details of the emission mechanism. In a paper published today in the Astrophysical Journal Letters, the authors show that the observed radiation must have originated in a jet moving at 0.9999 of the speed of light towards us.  The high energy radiation observed by MAGIC is was emitted by electrons accelerated to TeV energies within the jet. The emission process can also be identified, it is the so-called “inverse Compton mechanism” in which ultra-high-energy electrons collide with low-energy photons and boosts their energy. Remarkably the same relativistic electrons are also producing the low-energy “seed” photons via synchrotron radiation.

“MAGIC has found the Rosetta stone of gamma-ray bursts” says Professor Piran. “This unique detection enables us for the first time to discriminate between different emission models and discover what are the exact conditions in the explosion. We can also understand now why such radiation wasn’t observed in the past.” Future Cherenkov telescopes such as the planned Cherenkov Telescope Array, a multinational project under construction will be much more sensitive than MAGIC. The current detection suggests that many other such events will be detected in the future and will continue to shed light on this cosmic mystery.