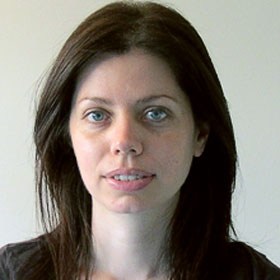 PRINT
Dr. Ofra Benny was born and raised in Rishon Lezion. After her military service, she began her undergraduate studies in Biotechnology Engineering at the Technion. Upon completion of her engineering degree in 2001, Dr. Benny continued her education and earned a Ph.D. while working in the lab of Professor Marcelle Machluf. Her research focused on the development of polymeric drug delivery systems for the continuous release of inhibitors of blood vessel formation (anti-angiogenic factors) to treat glioblastoma brain tumors. She also developed an encapsulation procedure for peptides, specifically for PF4/CTF and PEX, in microspheres composed of the polymer PLGA. When injected intracranially in mice, these microspheres slowly release the peptides and inhibit vascular and tumor growth. Similarly, chemotherapy drugs released locally in the brain near the tumor site using this mechanism demonstrated improved anticancer activity with reduced systeic exposure. This research yielded a number of manuscripts in both the FASEB and Clinical Cancer Research Journals and, in 2006, she was awarded the Outstanding Pharmaceutical Paper Award by the Controlled Release Society for her work.
Upon completion of the Ph.D. at the end of 2006, Dr. Benny began her postdoctoral studies at Harvard University, Boston Children’s Hospital in Boston, Massachusetts under the mentorship of Dr. Judah Folkman—a pioneer of the angiogenesis field who demonstrated the dependency of tumors on the formation of new blood vessels. Dr. Benny focused her research on improving a broad spectrum a

nti-angiogenic drug, named TNP 470, by reengineering the drug for cancer treatment. Her challenge was to maintain the drug’s activity while improving its pharmacological properties and eliminating the neurological side effects found during clinical trials. Dr. Benny chose to covalently conjugate the drug to a di-block polymer mPEG-PLA. Selecting the length and properties of the polymer enabled its self-assembly into nanomicelles in an aqueous environment. Compared to the original drug, the new formulation of TNP -470, named Lodamin (from the Hebrew “no blood in”), showed better stability, solubility and absorption in the intestine. Additionally, Lodamin’s penetration of the brain was prevented and the consequent neurological side effects attributed to the original drug were eliminated, as demonstrated in mice. Lodamin was able to inhibit various cancers including skin, lung, brain, liver, breast, ovarian and pancreatic cancers. Because the nanomicelles accumulated in the liver after oral administration, a dramatic inhibition of liver metastasis was seen in the mice. The results were published in Nature Biotechnology in 2008, in a paper that described the development of the drug and its anticancer activity.
After the sudden death of Dr. Folkman, Ofra continued her research in the laboratory of Dr. Robert D’Amato. Her focus expanded to the vascular eye disease AMD (Age- related Macular Degeneration), one of the leading causes of blindness among elderly populations. Advanced stages of the disease are characterized by an accumulation of blood vessels in the retina (located at the back of the eye), which causes a rise in intraocular pressure and finally damage to the eye neurons. Ofra’s study demonstrated that Lodamin is highly active in the testing model of AMD (laser-induced choroidal neovascularisation) and exhibits advantages over the existing therapies by regressing neovascular lesions and not merely inhibiting their growth. Moreover, it can be administered in a less invasive manner, without intraocular injection as is required today.
In 2010, Dr. Benny was promoted to the position of Instructor at Harvard University and Associate Scientist at Boston Children’s Hospital. Her research continued to focus on the dynamic field of tumor microenvironment, cancer and ocular vascular diseases. She joined the journal Frontiers in Bioscience as managing editor, and was a guest editor for the Journal of Ophthalmology, managing a special issue: Lymphatic and Blood Vessels in the Eye: Physiology, Health, and Disease.
Since the beginning of 2013, Dr. Benny has been a faculty member at Hebrew University’s Institute of Drug Research, Faculty of Medicine, School of Pharmacy. Her team is currently investigating the mechanisms involved in angiogenesis and factors causing resistance to anti-angiogenic therapies. Their goal is to understand the mechanisms responsible for drug resistance in order to develop innovative treatments with improved activity for prolonged treatment without tumor escape. Treatment optimization is being investigated at the molecular level by searching for new drug targets, and at the formulations level by developing nanoparticles with improved cancer-targeting abilities and enhanced uptake.
Additional studies focus on understanding the tissue microenvironment in neovascular pathologies, including the lymphatic system. By better understanding this specific niche, Dr. Benny and her team will be able to develop innovative tools to deliver drugs more efficiently. To achieve these goals, the lab employs several different techniques, including drug encapsulation, polymer conjugation, molecular biology, tissue culture, cellular models of angiogenesis, vascular permeability, and cancer. The studies are performed in primary cultures of endothelial, lymphatic, and various cancer cell lines. In addition, the laboratory uses research models for angiogenesis, cancer, and metastasis.
SHARE